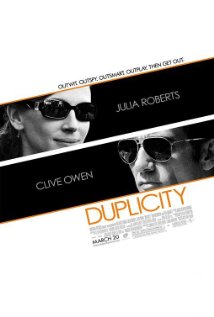 Not recommended under 13, PG to 15 due to adult themes, sexual references and coarse language.

Claire Stenwick (Julia Roberts) and Ray Koval (Clive Owen) were government spies, she worked for the CIA and he for MI6, when they first met in Dubai. Within moments of this meeting they wound up in bed. She then drugged him and made off with the top secret documents in his possession.
Having met on a number of occasions for secret trysts since then, they now work for rival companies whose bosses are bent on undermining each other and would gladly do anything to destroy the other’s company. Ray’s boss Richard “Dick” Garisk (Paul Giamatti) has even hired a team of corporate espionage experts who are trying to steal the latest ideas in Howard Tully’s (Tom Wilkinson) product pipeline. Claire is an integral member of Tully’s counter-intelligence team who are commissioned to keep the secret product safe, a product so secret that no one on the team even knows what it is they are protecting.
To complicate matters Claire and Ray have secretly teamed up and are not only working for their respective companies but are also working for themselves, trying to steal the corporate secret for their own financial gain. Everything appears to be going exactly to plan, except for one thing. Aside from the secret, there is something else that they don’t know, and that is whether or not they can even trust each other.

The above-mentioned violent scenes and scary visual images, in this movie that could scare or disturb children under five.

Duplicity is a film best suited to adults or older teens. It features witty dialogue and incorporates a number of unexpected plot twists.
The main message from this movie is that all is fair in love and war.
Values in this movie that parents may wish to reinforce with their children include: