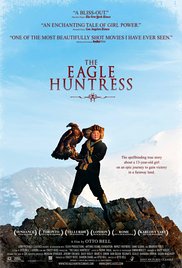 The Eagle Huntress is a documentary that follows the extraordinary life of Aisholpan Nurgai, a 13-year-old from a nomadic Mongolian tribe. Aisholpan dreams of becoming an eagle hunter, a skill that has been passed down through twelve generations of her family. It is a role completely dominated by men and it takes enormous courage and strength of character for Aisholpan to break through the gender stereotypes of her community to realise her dreams. Aisholpan is a true heroine. The film highlights her incredible bond with her father, who is her most staunch supporter, as well as the mesmerising relationship that builds between her and her very own golden eagle.

Cultural connections to the land and traditional practices, such as hunting; challenging gender roles and stereotypes; father-daughter bonds

The eagle huntress is a moving film about following your dreams, despite the challenges. It is a true story of strength, bravery and love. It is a great film for both boys and girls with important messages about gender stereotypes. The film also provides a fascinating insight into a different culture.

It is most suitable for children aged 8 and over because there are scenes of hunting that might upset younger children and English subtitles which need to be read.

Parents may wish to discuss the why traditional gender roles exist and why people resist change.