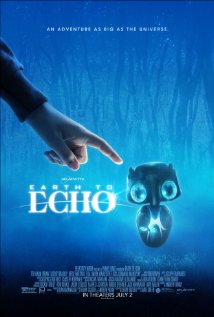 Not recommended under 10, PG 10-12 due to themes and scenes that may scare younger children.

Earth to Echo is a science fiction action-adventure story that follows the journey of three friends: Tuck (Brian Bradley), Munch (Reese Hartwig) and Alex (Teo Halm). When a new highway construction project begins within their neighbourhood of Mulberry Woods in Las Vegas, families begin to be forced out of their homes. During their last week in Mulberry Woods, the three friends start to receive mysterious encoded messages on their personal phones. When they tell their parents and the authorities, they receive little support - the adults fail to take them seriously. When construction men come and delivernew phones to the residents of the neighbourhood, the boys become even more suspicious and hide their old mobiles.

Equipped with their curiosity and strong friendship, Tuck, Munch and Alex set out on a journey to discover a way to crack the code on their own. Munch eventually discovers that the encoded message he received is actually an image of a desert approximately 20 miles away from their homes. On their last night, the three ride their bikes out to the desert and are shocked to realise they may have discovered more than they had bargained for, coming into contact with a strange being from another world who is in desperate need of their help. The alien robot, named Echo, is stranded on earth and needs assistance in rebuilding his spaceship.

However, the boys and their new friend run into trouble as they discover that the construction men were in fact undercover operatives investigating the missing spaceship.

Younger children in this age group may also find Echo scary at first. There is also a scene when, after the boys are kidnapped, one of them, in tears, sends a farewell message on his phone in case he is never seen again.

The film contains some substance use, including:

The film contains mild language, including:

Earth to Echo is a motivational film that promotes friendships and relationships as the foundation of a happy life. Tuck, Munch and Alex remain friends throughout the film, despite the challenges that are thrown their way. The story also depicts the importance of coming to one’s own conclusions and not being judgmental, with the alien robot Echo showing the boys that there is more to the world than they had once thought.

There is some violence, younger children might find Echo scary, and the film’s themes suit it more to children 12 and over. Some parents may be concerned that the boys, as role models, steal and drive a car, lie to their parents and get into some other  risky situations. The hand-held camera filming style may make viewing difficult for some people and the film more confusing for younger children.