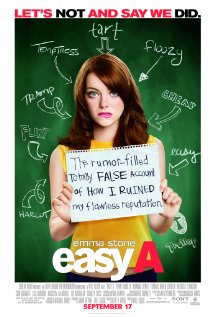 Not suitable under 13, Not recommended 13-15 (themes, sexual references, coarse language and drug references)

High school student Olive Penderghast (Emma Stone) believes herself to be average and un-noticed by her peers. Olive’s best friend Rhiannon (Alyson Michalka) invites Olive to go away for the weekend but Olive refuses, preferring to stay at home and do nothing. At school, Rhiannon asks Olive about her weekend at home and Olive, feeling guilty about not going away with Rhiannon, makes up an elaborate story about losing her virginity ("V card") to a college boy. Olive’s story is overheard by the campus Christian do-gooder Marianne (Amanda Bynes), who wastes no time spreading the gossip. Olive is promptly branded a “skank” with her life now echoing The Scarlet Letter, a book Olive is studying for English Literature.

Olive has good intensions of renouncing her lie, but before she can do so her classmate Brandon (Dan Byrd), who knows about the lie, convinces Olive to have fake sex with him at a party so that he can improve his social status at school. Brandon is being victimised because he is gay. Olive, feeling sorry for Brandon, agrees to the deception, and their pretence is so successful that Bandon is immediately skyrocketed to the status of Super Stud. The next day Olive is inundated with losers and misfits offering her gift cards and money vouchers for fake sex in order to improve their social status. Olive agrees to help them but the situation soon spirals out of control.

Easy A contains some violence. Examples include:

Children in this age group are also likely to be disturbed by the above.

Easy A contains some simulated sexual activity, some mild sensuality and brief partial nudity. Examples include:

Easy A depicts some substances use and references to drug use. Examples include:

Easy A contains frequent coarse language and put-downs throughout. Examples include:

Easy A is an outstanding comedy romance about relationships and morality. The film has a great cast and the dialogue is clever and witty without the need to rely on cheap and crude humour. While not suitable for younger teens, the film raises some important issues which may be discussed with older adolescents.