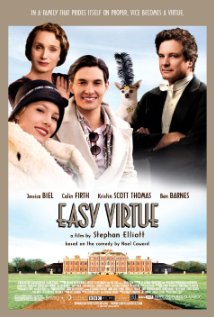 Easy Virtue is set in pre-war 1930s England. When John Whittaker (Ben Barnes) brings his glamorous American wife Larita (Jessica Biel) home to meet his family, he’s quite unprepared for their reaction. Larita is a fast and fun loving person who instantly clashes with her overbearing, stuffy, upper-class mother-in-law, Veronica Whittaker (Kristen Scott Thomas).
‘Easy virtue’ is what Mrs. Whittaker accuses her new daughter-in-law of having when she discovers she’s been married previously and has a somewhat shady past. Mrs. Whittaker and her two equally obnoxious daughters set out to undermine and humiliate Larita who has to rely on her own cunning to stand up to these women and play them at their own game.

Larita finds an unlikely ally in Mr. Jim Whittaker (Colin Firth) who has failed to come to terms with the futility of his involvement in the First World War, and war in general. Jim has consequently withdrawn from life and his demanding wife and daughters. He finds a kindred spirit in Larita and encourages her in her opposition to the family and their judgemental upper class values.

Apart from the above mentioned scenes, there is nothing in this movie that is likely to scare or disturb children aged eight to thirteen.

Easy Virtue is a romantic comedy that excellently captures the atmosphere of 1930s England. The story is told with some superb acting, particularly by Kristin Scott Thomas. It is aimed at an adult audience and lacks interest for children
The main messages from this movie are not to make instant judgements about people and to listen to the whole story before forming opinions.
Values in this movie that parents may wish to reinforce with their children include:

The movie could also give parents the opportunity to discuss with their children attitudes and behaviours, and their real-life consequences, such as