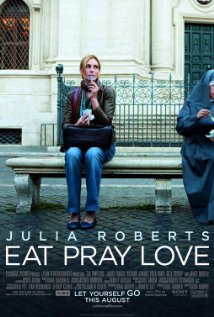 Not recommended under 15 (Themes, Coarse language)

Based on Elizabeth Gilbert’s popular novel, Eat Pray Love follows the journey of self discovery made by Liz Gilbert (Julia Roberts).

Liz (Julia Roberts) finds herself lost in her marriage to Stephen (Billy Crudup) and begins divorce proceedings. After a brief love affair with David (James Franco), a much younger man, she decides to take a year to overhaul her life. She travels to Italy to rediscover her passion for food and her spark for life; then to India to seek spiritual balance and finally ends her year in Bali to practice the life balance she has learnt. There she meets a Brazilian man, Felipe (Javier Bardem) who encourages her to trust in love again.

There are some very infrequent and mild violent scenes in this movie.

There are some scenes in this movie that could scare or disturb children under the age of eight, including the following:

Children in this age group are also likely to be distrubed by the above mentioned scenes.

It is unlikely that anything in this movie will scare or disturb children over the age of eight.

Eat Pray Love is a movie about taking control of your life which is confronting at times when addressing the guilt of divorce, separation, alcoholism and family breakdown. It is not suitable for younger children and adolescents, but may appeal to those over 15, especially since it has had a lot of publicity.