Edge of Seventeen, The 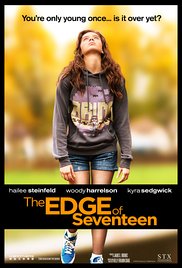 Not recommended under 15 due to themes, under-age drinking, coarse language and sexual references.

The Edge of Seventeen is the story of two best friends as they struggle to navigate the complex teenage social circles of high school, relationships and dating. After the death of her father a few years before the film opens, 17-year-old Nadine (Hailee Steinfeld) struggles with depression and a sense of isolation. When she finds out that her best friend Krista (Hailey Lu Richardson) has slept with her brother Darian (Blake Jenner), she feels more alone than ever.

Younger children in this age group may also find the father’s heart attack and the girl’s apparent suicide threat disturbing.

The Edge of Seventeen is a coming-of-age film that focuses on the personal growth and development of Nadine, a teenage girl trying to find her way in the world. As she navigates the complexity of relationships, she learns to appreciate people’s motivations without assuming malicious intent. Through her relationships with both Nick and Erwin, Nadine comes to realise that she is deserving of respect from others, and thus begins a process of re-evaluating her own sense of esteem and worth. She also realises that there is room for her to be more compassionate towards others, and learns to take greater responsibility for the part she plays in maintaining positive and supportive relationships.

Due to the film’s themes, scenes of underage drinking, coarse language and sexual references, the film is not recommended for viewers under 15, but it raises important issues that parents may wish to discuss with older teenagers.

Issues that parents may wish to discuss include: