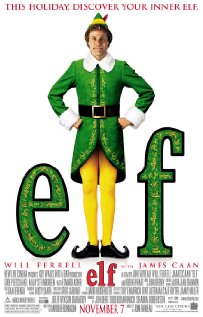 Elf is the story of Buddy (played by Will Farrell), a 30 year old man who, as a baby, crawled into Santa’s sack and was accidentally taken to the North Pole. He was raised as an elf helping Santa in his workshop along with the other elves. Buddy is just beginning to realise that he doesn’t fit in with the elves, when he finds out that he is human. He decides to go to New York to find his biological father, Walter Hobbs (James Caan). Walter has a senior position with a book publishing company and is on Santa’s ‘naughty’ list, as he is more interested in work and making a profit, than he is in the quality of the books he publishes, the wellbeing of his staff or, in fact, in his own family.

Buddy has a very childlike view of the world and is both overwhelmed and delighted by the sights of New York. With his elf clothing, naïve manner, social ineptitude and total delight in the mundane, Buddy comes across to cynical New Yorkers as mentally unstable. When he visits Walter in his office in the Empire State Building, Walter draws the same conclusion and has him thrown out of his office. Buddy is then attracted to the Christmas decorations on Gimbels Department store and ends up ‘working’ in the toy department, where all the staff are also dressed as elves. He meets Jovie (Zooey Deschanel) there, an attractive but depressed young woman who is forced to do what she sees as humiliating work in order to pay the rent. After an incident involving a fight with the store’s ‘Santa’, Buddy is forced to leave Gimbels and meets up with Walter once again. This time, Walter takes him to the doctor for a DNA test, which confirms his paternity.

Walter takes Buddy home to meet his wife Emily (Mary Steenburgen) and ten year old son Michael (Daniel Tay). The family is obviously an unhappy one, due to Walter’s lack of involvement, but Emily, and later Michael, come to love Buddy’s enthusiasm and good nature. However, Buddy’s relationship with Walter is further damaged by an incident with a prominent author of children’s books, who happens to be a dwarf. Buddy’s naivety once again gets him into trouble.

In the meantime, Santa is having trouble with his sleigh as he approaches New York. The sleigh relies on Christmas spirit to keep it and the reindeer airborne and the lack of Christmas spirit in New York causes it to crash in Central Park. Here Buddy, Walter, Emily, Michael and Jovie all play a part in saving Christmas and resolving their relationships.

There is some violence in this film including the following scenes:

The violent scenes mentioned above could frighten children in this age group, particularly the scene with the racoon.

In the scene in Central Park, Santa is pursued by four rangers on horseback. Accompanying this chase scene is some very close up footage of the horses, sudden and quite violent movements and loud noises which could scare younger children.

Parents may also wish to consider the impact on very young children of Buddy ripping off Santa’s beard and having a fist fight with him. The issue of who is the ‘real’ Santa could be quite confusing for them.

Children in this age group could also be concerned by Buddy’s father’s rejection of him.

Children in this age group may also be scared by scenes mentioned above.

It is unlikely that children over the age of eight will be scared by this movie, although most would certainly be startled by the racoon’s attack on Buddy.

It is unlikely that children over thirteen will be scared or disturbed by any scenes in this movie.

There are no sexual references in this movie, although Michael, who is ten years old, has to coach Buddy in how to ask Jovie out on a date.

There is no nudity or sexual activity. One scene that may require discussion with very young children is where Buddy enters the women’s showers, sits on the hand basins and listens to Jovie singing as she has a shower. When she realises he is there she wraps herself in a towel and confronts him.

Buddy and one of the mail room staff at Walter’s workplace share a hip flask and are seen lying back on the mail trucks, philosophising and obviously under the influence of alcohol.

There is no coarse language in this movie. At one stage one of the characters calls out ‘Up yours.’

The ‘take home’ message of this movie is that Christmas cheer is important and people who come across as simple may have a lot to offer.