Elfkins, The - Baking a Difference 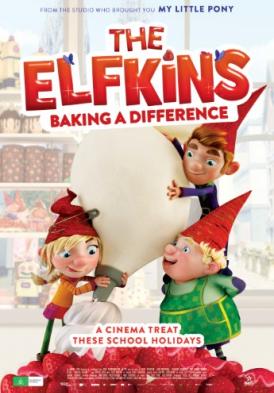 Not suitable under 4; parental guidance to 5 (violence, scary scenes)

For many years the Elfkins have lived underground, in hiding, from the mean and ungrateful humans whom they used to help until the tailor's wife told everyone about them. Every year at the Elf-fest, the Elfkins re-enact this story as a reminder. They also compete to see who has been the best craftsman for the year. Helvi (voice of Jelia Haese) is a high-spirited and well-meaning Elfkin but nearly always lands in trouble. When she is beaten in the competition by Kipp (Louis Hoffman), she decides to leave her village and go up to the exciting world of humans.

Helvi is followed to the outside by Kipp and her friend Butz (Leon Seidel) where, after navigating the dangers of the road, they meet up with Theo (Detlef Bierstedt), a former brilliant chef. Theo's shop is now sadly closed because his brother, Bruno (Rolf Berg), has opened a new, glitzy shop opposite and taken all of Theo's business. Theo is now in debt and Bruno is looking to take over. It is up to the Elfkins to put things right and to remember their main purpose in life, which is to help others.

There is quite a lot of violence in this movie, mostly done for laughs, including:

The Elfkins - Baking a Difference is an animated, comic family movie. The background sets are quite impressive and the Elfkins are cute. The movie explores the issues of individual competitiveness versus working together as a group. The brothers, Theo and Bruno, have become rival enemies but things work out well in the end. This movie is best suited to children aged 6 and over and, as there is quite a lot of violence, parental guidance is recommended for children aged 4-5.

The main messages from this movie are to help others and to work together, rather than against each other.