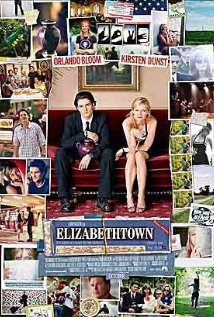 Drew Baylor (Orlando Bloom) is a successful designer with Mercury Worldwide Shoes. When his latest design for the company is a complete failure, resulting in a 972 million dollar loss, he is fired by his boss (Alec Baldwin), dumped by his girlfriend (Jessica Biel) and he begins contemplating suicide. His plans are put on hold when his sister rings to tell him their father, Mitchell, has just died. Drew is sent by his mother (Susan Sarandon) to bring his father’s body home.

Drew travels to Elizabethtown in Kentucky, befriending a friendly stewardess, Claire(Kirsten Dunst) on the way. He is warmly welcomed by his father’s extended family, with whom he has had little contact for many years. Over the course of the next few days, and with the assistance of Claire’s persistent optimism, Drew learns more about his father and family, while coping with his own sense of loss and failure.

There is one mild instance of violence when a video is put on for the children to watch. The video shows a man blowing up a home. It is shown for comic effect and all the children watching it are enthralled.

There are a few scenes that could concern children under the age of five, including:

Despite the comic effect, some children over the age of eight could be concerned by the scene in which Drew is in the process of committing suicide.

Despite the comic effect, some children over the age of thirteen could be concerned by the scene in which Drew is in the process of committing suicide.

The film contains one scene in which Drew and Claire kiss and move to the ground. Drew’s voiceover suggests that all they would do is kiss that night. The next scene shows them in the morning in Drew’s room. Claire is finishing getting dressed and Drew is asleep in bed. When Claire goes into the lobby, the all-weekend wedding party group give her a rousing cheer.

There are a few instances where alcohol is used, including:

There was occasional use of coarse language in this movie, including:

The main messages from the movie relate to not giving up after failure, no matter how great that may be, the importance of family and being a good parent.