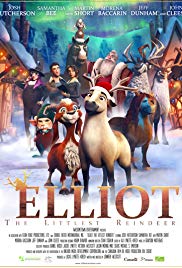 Not recommended under 5 and Parental guidance to 8 due to scary scenes and coarse language.

Elliot (voice of Josh Hutcherson) the miniature horse lives on a struggling goat farm and reindeer training centre. Elliot dreams of being chosen to pull Santa’s (voice of George Buza) sleigh and, with the help of his good friend Hazel (voice of Samantha Bee), trains harder than any of the reindeer on the property. Unfortunately Walter (voice of Rob Tinkler) the struggling farm owner doesn’t see his potential. Elliot is bullied by self- proclaimed reindeer leader ‘DJ’ (voice of Christopher Jacot), and none of  the other animals believe that Elliot has what it takes. When a news story breaks that one of the reindeer has left the North Pole and a replacement must be found immediately, Elliot stows away in order to secretly enter the Reindeer Games and prove his worth once and for all. In the meantime,  Walter makes a deal with a shady woman to sell the farm and all the animals but what he doesn’t realize is that she is planning to turn them all into jerky. Elliot and Hazel discover this, along with an evil elf’s plot to get rid of all reindeer. Together they must prove their worth not only to save Christmas but also to save their friends.

Although there is no profanity in this film, there is frequent name calling and put downs including:

Elliot the Littlest Reindeer is an animated Christmas tale about persistence and the power of dreams. It has a dark side to it that is geared toward slightly older children.

The main messages from this movie are to be proud of who you are, especially when you are different from everyone, to overcome your fears by facing them and to remember that if something is important you will find a way to fix or achieve it.