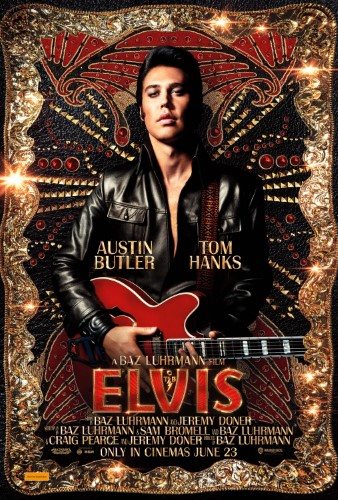 Not suitable under 12; parental guidance to 14 (adult themes, drug taking)

Elvis is a biographical story of the King of Rock and Roll. Elvis was born in Tupelo, Mississippi and, as a young boy (Chaydon Jay), he is seen trying to get his dad (Richard Roxburgh) out of prison. Elvis takes solace in the company of black gospel church services, at a time when blacks and whites were still segregated, and he is very much influenced by the music. As a young man, Elvis (Austin Butler) begins his singing career which features his famous hip wiggling and blatant sexual appeal. He is approached by Colonel Tom Parker (Tom Hanks), who realises the potential Elvis has as a money-making concern, to become his manager. Elvis exudes sexuality on stage and his adoring female fans fawn all over him. This attracts the condemnation of the moral majority who try to curtail Elvis and change him into a more wholesome act. Elvis is a rebel, however, and refuses to conform. He is drafted into the army and sent to Germany to serve, where he meets and falls in love with Priscilla (Olivia DeJonge) and they later marry. Tom Parker commits Elvis to a five year contract to perform at Las Vegas, which Elvis finds increasingly difficult to fulfil. He turns to drugs to sustain his heady lifestyle and becomes bloated and temperamental. Priscilla leaves him during this difficult time and Elvis sadly dies at the age of 42, leaving a legacy that will continue forever.

Elvis is a biopic musical about the famous King of Rock and Roll, which is set in a period of civil unrest and segregation of blacks and whites. The telling of the story moves at a fast pace and glosses over a lot of the worst of Elvis’s life but it still tells a sad tale of a young man manipulated and abused by a predatory manager. The film will appeal to a wide audience, however, due to the adult themes in the movie and the presence of drug taking, it is not suitable for children under 12 and parental guidance is recommended for children aged 12 – 14.

The main messages from this movie are that popular figures have great influence on many people and this can be used for good or bad; and the importance of Elvis’s family to him.