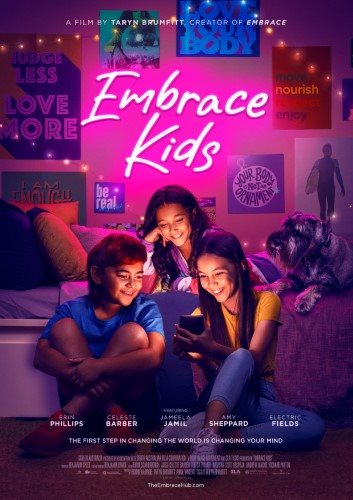 Suitable for general audiences though may lack interest under 7; parental guidance to 9 (themes, mild language)

Writer and director, Taryn Brumfitt, who is also the founder of ‘The Body Image Movement’, takes viewers on a journey to wholeheartedly embrace themselves in this documentary aimed at kids. Taryn worked with a wide range of children to gain insights into some of the problems facing kids today and how these aspects, even the subtle ones, influence our lives and our choices. Taryn is joined by actors, comedians, influencers, sports stars, teachers and speakers who all lend a unique perspective to the global problems of body shaming, superficial judgements, bullying and feelings of helplessness and unhappiness. Through these positive and, at times, hilarious interviews, children will begin to understand the effects of the media in driving these issues, they will be able to recognise stereotypes and unhealthy habits and, ultimately, they will learn that they have the power to choose. That is, children have the power to choose gratitude and happiness; they have the power to choose to love themselves and their bodies for everything they can do; and they have the power to choose how they exist and where their dreams will take them. They, and they alone, should determine how they feel about their bodies, remembering that they are defined by their spirit, their heart and who they are as a person, not who the media think they should be. Children will learn that they each have a voice and that they have the power to change the environment around them, simply by remembering to love, not loathe, their bodies and simply by being themselves.

Body shaming; Bullying due to race, ethnicity, physical appearance, disability, gender etc; The impact of advertising and how the media uses it, as well as the impact of influencers, to teach us that we are broken; The business of making people feel unhappy so that we will buy more, while striving for a standard that is impossible to achieve; The negative effects of social media and how it contributes to the general unhappiness of millions of people.

Embrace Kids is an eye-opening, Australian, documentary from writer, director and positive body image crusader, Taryn Brumfitt. The film is aimed at children between the ages of 8-14, though its powerful messages are also important for older teens as well as slightly younger kids, as more and more children, from earlier ages, are being exposed to the subtle and pernicious effects of social influence and marketing.

The main messages from this movie are to be yourself, and to believe in yourself and in your own individual potential to make a difference in the world. Through the film, kids will be reminded that the happiest people are not the ones who are striving to meet impossible standards or who are even simply trying to fit in; the happiest people are following their dreams and their hearts, regardless of what anyone else thinks or says. The film teaches that you are beautiful, unique and enough, exactly as you.