Emil and the Detectives 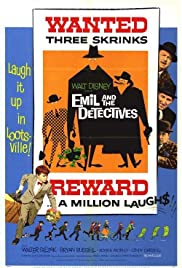 Ten-year-old Emil (Bryan Russell) is about to travel from his small, German home town to Berlin to visit his grandmother. Just before Emil boards the coach, his mother secures an envelope containing 400 marks to his chest pocket with a safety pin, which he is to give to his grandmother. An infamous crook, called Mr Grundeis (Heinz Schubert), observes this and decides to steal the money from Emil. Grundeis manages to sit next to Emil; steal the envelope while Emil has fallen asleep; and then get off the bus. When Emil awakes, to his shock and horror, he realises the money has gone and, immediately suspecting Grundeis, he spots him in the crowd and follows him. When his attempts to alert the police lead to nothing, Emil asks a local group of kids under the lead of Gustav (Roger Mobley), who call themselves "The Detectives" to help him retrieve the stolen money. However, they soon discover that Grundeis is not a simple pickpocket but is actually involved with two notorious bank robbers, The Baron (Walter Slezak) and Müller (Peter Ehrlich). Will Emil and The Detectives be able to get the money back and put a stop to The Baron and his accomplices?

This 1964 family adventure movie, Emil and the Detectives, is very loosely based on German author Erich Kästner's 1929 novel of the same title but producer Walt Disney has taken the liberty to alter some parts of the story and add some action. Apart from the engaging story, being set mainly in Berlin, Germany, over 55 years ago, this film gives Australian families an interesting glimpse into post-war Germany. Parental guidance is recommended to guide through some scary and violent scenes, and to give some historical and cultural perspective, for example in regard to smoking, or the way that relatively young children are left to their own devices much more than Australian children today would be.

The main messages from this movie are that it is important to have friends and that bad actions won't go unpunished.