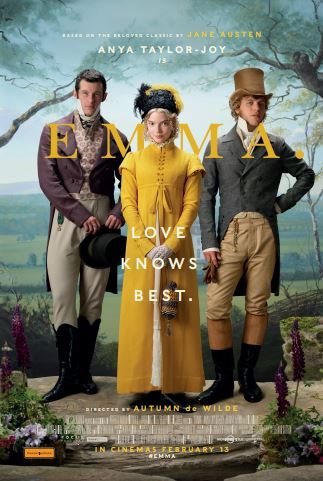 When her long-time governess and faithful friend, Miss Taylor (Gemma Whelan), finally marries, Emma (Anya Taylor-Joy) prides herself on her matchmaking abilities while Mr. Weston, (Bill Nighy) her hypochondriac father, bemoans the loss of a member of his household. To fill the void left in her life, Emma forms a friendship with Harriet Smith (Mia Goth), a young lady with a mysterious background whose social standing Emma hopes to elevate. When she learns of Harriet’s affections for a farmer, Emma persuades her to set her hopes higher and contrives a match between Harriet and the local preacher Mr Elton (Josh O’Connor), who unfortunately only has eyes for Emma. When Mr Elton breaks Harriet’s heart and Emma refuses him, he disappears only to return weeks later with a snobby and ostentatious wife (Tanya Reynolds). Meanwhile Mr Weston’s (Rupert Graves) son Frank Churchill (Callum Turner) returns to see his father and meet his new stepmother. While Frank seems to pay special attention to Emma, she thinks Harriet has fallen in love with him and when he turns out to be secretly engaged to another woman Emma is devastated for her friend and then even more so for herself when she learns that Harriet had never thought of Frank but had rather fallen for Mr Knightly (Johnny Flynn), the same man she herself has unexpectedly come to love. Trying to right past wrongs, Emma sets about making amends for the harm she has unintentionally caused and does her best to ensure not only Harriet’s happiness but also her own.

Emma is a period film based on the timeless classic by Jane Austen. It is a warm-hearted story, set against a beautiful backdrop featuring a number of charming performances. However, the highbrow language may be difficult for younger viewers to follow. It will likely be most enjoyed by Jane Austen fans and mature, female, audiences.

The main messages from this movie are that it is far more important to be kind than it is to be right, that love will prevail, and that love is often much closer than we might expect.