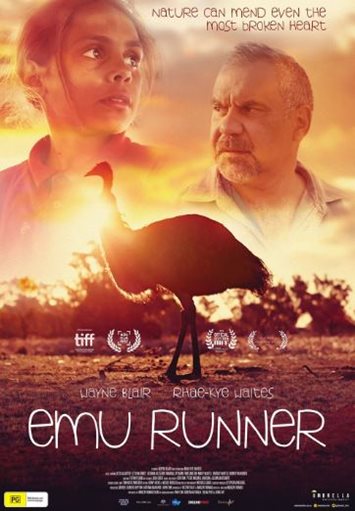 Not suitable under 8, parental guidance to 10 (language, substance use, death of a parent)

Emu Runner follows the story of an Aboriginal family in outback Australia as they struggle with the untimely death of their mother. While grieving husband and father Jay Jay (Wayne Blair), learns to be a single parent to three kids, 8-year-old Gem (Rhae-Kye Waites) starts regularly disappearing into the bush, having forged a bond with a wild emu. An important and mythical bird from her dreamtime ancestry (according to her mother), Gem believes she can speak to it, as her mother could before her. Following the arrival of Heidi (Georgia Blizzard) – an inexperienced and naïve social worker from Sydney – the family struggles to keep things together. When Gem’s brother Ecka (Rodney McHughes) gets involved in drugs, and Gem starts skipping school to steal food to feed her new friend, tensions rise between the family and the authorities. As Gem is about to be taken away from her family, Heidi finally learns the reason behind her behaviour, and realises that Gem and her family are better off together, to heal and grow.

Death of a parent; Substance use; Family separation; Stealing.

Emu Runner is the debut film of writer/director Imogen Thomas, that endeavours to tell an important story of grief and Aboriginal community. This movie will likely be most enjoyed by an adult audience and families with older children.

The main messages from this movie are supporting each other when times are hard and putting your best effort in gets results.