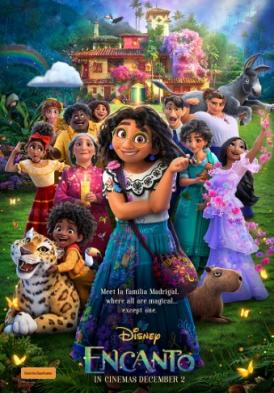 Blessed by an enchanted candle while fleeing for their lives, Abuela Alma (Maria Cecilia Botero) raises her three small children to be of service to the community in which they live. As they grow, each child is granted a special gift: one can see the future; one can heal with food; and one can change the weather. As they each have their own families, their children too are blessed with special powers. Everyone has one - everyone except Mirabel (Stehanie Beatriz) who wishes with all her heart that she had a special gift that would make her family proud. As her youngest cousin is blessed with his gifts, Mirabel struggles with feelings of regret, sorrow and uselessness, and suddenly sees cracks forming throughout their family’s magical home, threatening the flame of the candle and threatening to tear them all apart. It seems that Mirabel can see something the others can’t, though her sister Luisa (Jessica Darrow) can feel her super strength waning. In a desperate bid to help her family, Mirabel tracks down her elusive uncle Bruno (John Leguizamo) who disappeared years before, discovering that the future he foresaw is coming to pass, the house is being torn apart, and that somehow she is at the centre of it all. Determined not to let her family down, Mirabel works on repairing relationships and begins to understand that sometimes not having a ‘gift’ can be the greatest gift of all.

Family breakdown; The pressure to be perfect and to hide how you truly feel; Feelings of uselessness, worthlessness and invisibility; Fear of the past repeating itself; Running away to try to protect others.

Encanto is a Disney Studios, animated musical set in Colombia. Filled with colour, culture and well-developed characters, this is a film that all but the youngest family members can enjoy. One thing to note is that the film does contain sequences of flashing lights which can be a trigger to those with photosensitive epilepsy or other photosensitivities.

The main messages from this movie are that everyone not only has gifts (both born with or developed) but that each individual is a gift.