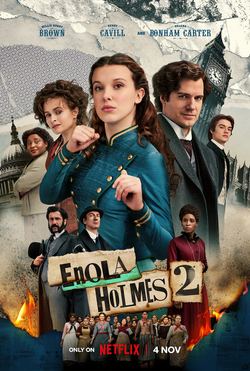 Not suitable under 10; parental guidance to 12 (violence, themes, scary scenes)

Following the triumph of solving her first case, Enola Holmes (Millie Bobby Brown) is determined to emerge from behind the shadow of her brother, Sherlock (Henry Cavill), and set up her own successful detective agency. For a young woman in Victoria era London, this proves to be more difficult than Enola could have ever imagined. She is about to give up and shut down shop when a penniless ‘matchstick girl’ called Bessie (Serrana Su-Ling Bliss) enlists Enola’s help to find her missing sister, Sarah (Hannah Dodd). Upon taking the case Enola finds herself thrust into a mystery that spans all strata of society, from the downtrodden factory workers who are dying from supposed cases of typhus, to the uppermost classes who have woven such a tangled web that Sherlock himself is having trouble unravelling the mystery. When a clue leads Enola to the scene of a murder she is pursued by the evil superintendent, Grail (David Thewlis), and his corrupt police officers who are more interested in protecting the powerful than in the carriage of justice. With the help of her long time love interest, Lord Tewkesbury (Lewis Partridge), and a multitude of impoverished women, Enola and Sherlock may just solve their respective cases and help make history.

Enola Holmes 2 is the sequel to Netflix’ original, Enola Holmes. The film is a dramatic adventure with some connection to historical events and is well cast, including a diverse range of characters with strong female role models. The film will be best enjoyed by tween and teen audiences, with parental guidance recommended to 12.

The main messages from this movie are that too many people make the mistake of trying to fit into the world around them but no matter how lost, unworthy or invisible you may feel if you remain true to yourself you will always find your way; that teamwork is more powerful than independence; and that sometimes it just takes one small thing to change the rules of the world.