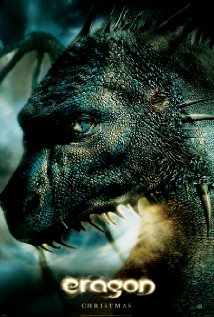 Not recommended under 13 (Viol. Scary scenes)

For thousands of years Dragon Riders maintained peace in the kingdom of Alagaesia. but they were betrayed by one of their own, Galbatorix (John Malkovich), who slaughtered all of the dragon riders along with their dragons before proclaiming himself King of Alagaesia.

While hunting in the mountains, Eragon (Ed Speleers), a 17 year old farm boy, stumbles upon a large blue dragon’s egg which has been magically transported there by the elvan warrior Arya (Sienna Guillory). Eragon takes the egg home where it hatches a baby dragon named Saphira (voiced by Rachel Weisz). When Eragon releases the young dragon for its first flight it transforms into a fully-fledged adult dragon able to communicate telepathically with him.

Eragon meets Brom (Jeremy Irons), a fallen ex dragon rider, who convinces him to take his dragon and seek out the Varden, a group of rebels. However, Eragon receives a dream message from Arya, who is being held prisoner by an evil sorcerer called Durza (Robert Carlyle). Eragon must free Arya and continue in his attempts to overthrow King Galbatorix.

Children in this age group are likely to be disturbed by the scenes mentioned above.

Many children in this age group are also likely to be disturbed by the scenes described above.

Many children over the age of thirteen years should be capable of coping with the violence and images presented throughout the film, but parents need to be aware of their own child’s level of susceptibility and previous exposure to films depicting fantasy and frightening images.

Eragon is a fantasy action adventure based upon books written by Christopher Paolini which targets a younger adolescent audience.

The main messages from this movie are the triumph of good over evil, the masses rising up to overthrow tyranny, youth overpowering corrupt evil adults and youth recognising their destiny. The film emphasises the message, “without fear there can be no courage”.

Values in this movie that parents may wish to reinforce with their children include the self-sacrifices made by a number of the film’s characters on the behalf of others.

This movie could also give parents the opportunity to discuss with their children the real life effects and consequences of war and violent acts and how these acts have a negative impact on the victim’s families.