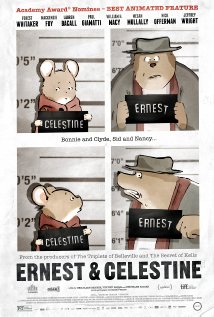 Not suitable under 6; parental guidance to 7 due to scenes that may scare young children and themes that may need discussion.

Ernest and Celestine is a heart-warming animated film about an unlikely friendship between a mouse and a bear. Celestine (voice of MacKenzie Foy) is a young mouse who lives in the underground world of rodents. She lives in an orphanage, where the caretaker tells the mice bedtime stories of evil bears living above them. Celestine has doubts as to whether the stories are real, and additionally struggles with the pressure that all rodents face to study dentistry, as she loves to draw and explore her creative side. In preparation for her studies, Celestine must travel above ground to collect the lost teeth of bear cubs – these are used by the mice to replace their own teeth if ever one breaks, so that they may still be active and contributing members of the mouse society.

However, on one occasion, Celestine is discovered by a family of bears who chase her into a rubbish bin where she is stuck for the night. In the morning, a kind yet destitute bear named Ernest (Lambert Wilson) discovers Celestine and attempts to eat her. After she is able to convince him not to, an unlikely bond forms between the two. However, they are soon faced by the prejudice and discrimination of others who are not so liberal in their thinking.

Friendship; discrimination and prejudice; identity and independence; poverty and crime

Children in this age group are likely to be scared by the ‘evil’ bears and the scenes where stories are being told about them, Celestine being chased by bears, Ernest almost eating Celestine and a fire that endangers characters.

Children in this age group may be disturbed by the treatment which Ernest and Celestine receive from their own communities as a result of their friendship, and their being hounded and put on trial.

There are some insults such as ‘moron’, ‘dumb’ and ‘stupid’ which children may imitate.

Ernest and Celestine is an animated French film, dubbed in English, that tells a story of friendship, prejudice and discrimination, as well as societal change. Celestine and Ernest form a bond that goes against the rules set by both bears and mice, but through their determination and decency they change the minds of those around them in regards to values that have been in place for decades. They foster a belief that accepting the differences of others is crucial to living harmoniously, and that minimising the socioeconomic class divide is the responsibility of all members of a society.

The film is likely to raise some interesting discussions for parents and children, but younger children may need help with some scary scenes and explanation of some parts of the story.