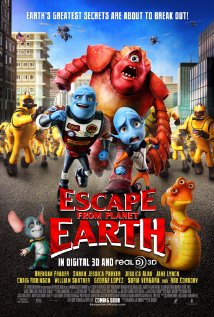 Not suitable under 5; parental guidance to 10 (violence, scary scenes)

Escape from Planet Earth is an animated science fiction film about two alien astronauts, Gary (voiced by Rob Corddry) and his brother Scorch (Brendan Fraser) who lead all of the space expeditions from their planet Baab.    Scorch is the more favoured and heroic of the two, gaining fame from the expeditions that he completes, while Gary is the easily forgotten brains behind Scorch’s brawn.  Jealous and competitive, Gary struggles to relate to his brothers showiness and during one of many sibling fights he quits the job he loves at mission control.

In Gary’s absence, Scorch agrees to lead a solo mission to the ‘Dark Planet’ - Earth.  However, when Scorch arrives on Earth, he finds the inhabitants unfriendly and is captured by the aggressive military Commander, General Shanker (William Shatner). Scorch is taken to Area 51 and kept as an alien prisoner.

The inhabitants of Planet Baab are shocked when one their most famous and beloved heroes vanishes.  Gary’s son Kip (Jonathon Morgan Heit) is particularly devastated by the news of his uncle’s disappearance and, channelling his uncle’s courage, sets out to lead a mission to the ‘Dark Planet’ to save him.  Gary and his wife Kirra (Sarah Jessica Parker) intercept Kip’s plan at the last moment but Gary, inspired by Kip’s bravery, sets out to save his brother and prove to the world that he too can be a hero.

Aliens; a child running away from home; kidnapping

There is reference to a sugary alien drink which is 80% sugar.  The drink is mentioned, drunk and marketed throughout the movie.

There is some coarse language and name calling that children may imitate, including:

Escape from Planet Earth is an animated children’s science-fiction film about two alien brothers on an unexpected mission to save the universe and prove their loyalty to each other. Violent and scary scenes make it unsuitable for children under 5 and parental guidance is recommended for 5-10 year olds. There are some scary characters, scenes of people fighting with aliens, and both people and aliens in danger and being killed.

The main messages from this movie are about the bond between family members and about having the courage to stand up for what is right.

Other discussion topics raised by the film include: