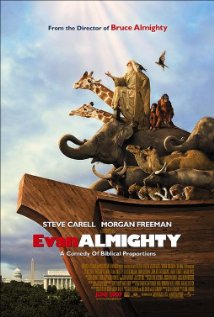 Not recommended under 5, PG to 8 due to scary scenes.

Evan Almighty opens with Evan Baxter (Steve Carell), Buffalo’s TV news anchorman celebrating his newly won election to Congress. Evan along with his wife Joan (Lauren Graham) and three sons Dylan (Johnny Simmons), Jordan (Graham Phillips) and Ryan (Jimmy Bennett) sets off for Capitol Hill. Evan begins his first day as a Congressman with the good intentions of both changing the world and spending more time with his family. However, he is soon approached by Congressman Chuck Long (John Goodman), who is seeking Evan’s sponsorship in the passing of a new bill which, unbeknown to Evan, will cause the destruction of forest land and wildlife. Evan is inundated with work and his good intentions of spending more time with his family fly out of the window. Joan prays to God to help the family grow closer together, while Evan asks God to help him in his fight to change the world. The next morning Evan wakes up to find a large wooden box in his hallway filled with rather ancient woodworking tools.
From here on Evan is plagued by strange occurrences including large stacks of lumber being delivered to his front yard, animals appearing in his yard two-by-two and large flocks of birds flying through his office window to perch upon his shoulder. Evan is visited by God (Morgan Freeman), who informs Evan there will be a flood, and that he must build an Ark and fill it with two of every kind of animal.
Initially Evan refuses to believe and ignores God’s directive, but he eventually relents and agrees to build the ark and his real adventures begin.

The Bible story of Noah’s Ark; political corruption; destruction of the environment

The film’s scenes of slapstick violence and accidental injury are mostly mild.  The exception to this was the violent nature of the flood, which was more threatening and intense. Examples include:

Children in this age group are likely to be particularly scared by:

There are references to use of substances, including:

Evan Almighty is a family comedy based loosely on the bible story of Noah’s Ark.  Children over five who enjoy stories that involve animals, slapstick comedy and toilet humour will find the film particularly appealing.

The main message from this movie is that an individual has the power to change the world through one act of random kindness (ARK) at a time.
Values that parents may wish to reinforce with their children include trust, kindness, self-sacrifice, perseverance, and environmental awareness.