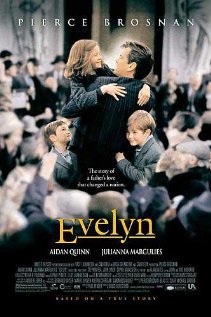 Based on a true story, Evelyn is about a nine year old child named Evelyn Doyle, living in Dublin in the 1950s. Evelyn’s Dad, Desmond, is deserted by his wife for another man and left to bring up his three children, Evelyn and two younger boys Dermot and Maurice.

Desmond loves his children dearly but the Children’s Act of 1941 states that a man is not able to care for his children if there is no mother and therefore children must be placed in state care. Abetted by the Catholic Church, the two boys are placed in an orphanage and Evelyn is placed in a convent. Desmond, an unemployed painter and decorator, turns to hard drinking which doesn’t help his cause. The courts state that Desmond needs to find employment and improve his means to care for his children. Bernadette, a university student working part time as a barmaid at the local pub, encourages him to stop drinking and look for work.

With the help of his father, a fiddle player, Desmond sings in the pub to earn money and finds some work. When he again appeals to the courts they state that the mother’s consent is required to release the children from care. Bernadette enlists the help of her solicitor brother Michael to help Desmond. American barrister Nicholas Barron, also agrees to help free of charge. They appeal again to the courts but the case is again rejected and the children must stay in care until they reach the age of 16 and with no right of appeal. They then turn to Tom Connelly, a retired barrister, who also agrees to help. They decide to take the case to the Supreme Court to challenge the Irish Constitution and set a new precedent in Irish law.

Children in this age group would be scared by the above violent scenes. They could also be disturbed by the following:

Younger children in this age group could also be disturbed by the above mentioned scenes.

Children in this age group would probably not be disturbed by this movie, depending on their own experiences in life and their sensitivity to the themes in the movie.

There is only one sexual reference, when the barman states that his wife is frigid.

There is a lot of drinking and smoking in this movie. Desmond is a heavy drinker and smoker but Bernadette helps him to stop drinking so much. Young girls are also shown smoking.

There is a lot of coarse language in this movie, with frequent use of the following words:

There is occasional use of:

The take home message is that with faith, hope and determination all things are possible.