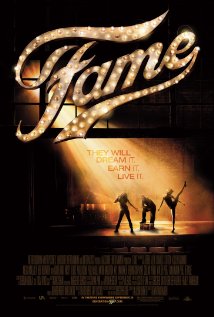 Fame (2009) is a remake of the 1980 Oscar-winning film by the same name. Of the 10,000 young people who apply for the prestigious New York City Fame School for the Performing Arts, only 200 lucky applicants make it in each year.  Fame  follows those lucky 200 from the gruelling auditions right through to their impressive graduation performance, as their raw talent is tamed and nurtured.  Whilst the focus of the movie is on the immense creative talent and their impressive performances, the movie delves into the lives of a few of the successful.   Malik (Collins Pennie), the tough guy with acting aspirations and Denise (Naturi Naughton), a timid pianist with other creative desires, are forced to battle their parents’ firm expectations about their future.  Victor (Walter Perez), an original music producer who finds it hard to toe the line, asks his father to take a risk and finance him.  Kevin (Paul McGill), a country boy with dancing dreams is forced to face the limitations of his talents whilst Joy (Anna Maria Perez de Tagle), a bubbly actress with huge potential is snapped up by a prime time television show before school has finished.  Jenny (Kay Panabaker), the self-conscious actress trying to find her place in the ruthless world of show business, falls for Marco (Asher Book), the singer with perfect pitch and “good boy” image, who is eager to help her succeed.

From this vibrant group there will be some who see their dreams crash down around them and others who break through to make it to the big time and “learn how to fly”.

Children in this age group may also be scared by the party scene.

Nothing of concern for this age group.

Fame is a remake of the 1980 film of the same name. It is doubtful whether this version will hold the same iconic impact that the original held but it will be hard for fans of the old Fame excitement to not take this opportunity to escape down memory lane and enjoy the updated singing and dancing extravaganza.  Younger audiences seeing Fame for the first time are likely to be inspired by the aspirations and dreams of the successful performers and the singing and dancing performances are sure to entertain younger and older audiences alike.

The main messages from this movie are the importance of determination, hard work, sacrifice and following your dreams.

Values in this movie that parents may wish to reinforce with their children include being true to yourself.