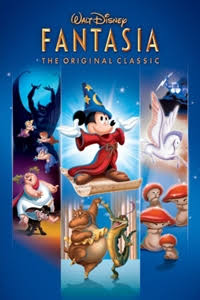 Fantasia is undeniably a classic in the Disney family, and it is one of a kind for its unusual and rather experimental format. However, there is not a classic story line, rather, Fantasia takes the viewer on a breathtaking journey of sounds and visuals. In 1938, Walt Disney's original plan was to boost his flagship character, Mickey Mouse, whose popularity was on the decline. The result was a short, animated piece featuring Mickey as ‘The Sorcerer's Apprentice’ – based on Goethe's 1797 poem about an apprentice who attempts to use some of his master's tricks but then does not know how to control the magical beings he created. As a short, stand-alone, the piece would have been difficult to market, therefore it was decided to embed it in a series of other short pieces, all accompanied by classical pieces of music. The audience follows Mickey Mouse as ‘The Sorcerer's Apprentice’; gets to appreciate the beauty and magic of nature and seasons; learns about the birth of our planet, development of life, the reign and demise of dinosaurs; delves into the mythical world of Pegasus, unicorns, centaurs, and God of Wine Bacchus; and witnesses fights between Good and Evil.

Fantasia is a remarkable spectacle of visuals and sounds, featuring some of history's most influential classical composers, including Bach, Tschaikowsky, Beethoven, Stravinsky, Ponchielli, Mussorgski, Schubert, and Dukas. Most importantly, Fantasia is a historical sensation, made before the invention of computer-aided animation technology, requiring every single frame to be hand-drawn, coloured-in, photographed and put together in an elaborate process, involving over 1000 artists and technicians. The animation was ground-breaking at the time and still manages to impress more than 80 years later. Not suitable for under 6 and parental guidance is warranted for a young audience to explain the historical context and to guide through some of the dark and scary scenes.

The main message from this movie is that we, as humans, can find enjoyment, stimulation, and inspiration in the aesthetics and harmonious interplay of sounds and visuals.