Fantastic beasts and where to find them 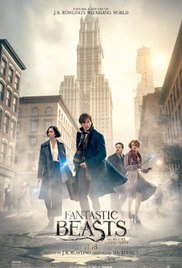 Not recommended under 13; parental guidance recommended 13 to 15 due to scary and violent scenes and disturbing themes

Fantastic beasts and where to find them is a prequel to the Harry Potter movies but it is more adult focussed. The story, set in the 1930s, follows Newt Scamander (played by Eddie Redmayne) a British Wizard with a passion for magical beasts and the creator of the infamous Hogwarts Textbook of Magical Creatures. Scamander journeys to New York with his suitcase full of magical beasts. When one of the cute but cheeky creatures escapes and causes havoc, and Scamander misplaces his suitcase, New York is set for some magical fun.

New York city is already having some troubles with a mysterious black and destructive force that is destroying property and causing fear and mayhem in the No-maj (Muggle) population. Scamander not only has to try and find all his escaped beasts on the streets of New York, he must also make sure that the black force doesn't end up in the wrong hands.

Wizardry and the occult; extinction and conservation of animals; war and terrorism; domestic violence and abuse

There are many scenes of violence in this movie including:

Children in this age group may also be disturbed by a number of the above mentioned scenes.

None of concern in the movie but plenty of tie-in Harry Potter merchandise.

Queenie is shown in her nightgown and then seductively dressing while being ogled by Kowalski, who is awestruck by her beauty.

There are some instances of substance use in this movie, including:

Fantastic beasts and where to find them, a prequel to the Harry Potter series, is a beautifully made, visually spectacular fantasy film that teenagers and their parents are likely to enjoy. Although there are some dark themes in this film, they are treated lightly and there is enough humour and fun to make it not too intense. The characters are kind and strong and refreshingly unconventional. There are, however, some scary and violent scenes and disturbing themes, so the film is not recommended for children under 13. Parental guidance is recommended for the 13 to 15 year old age group.

The movie has important messages about: