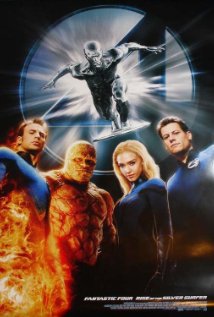 Speeding away from a dying planet somewhere in the cosmos, a silver streak called The Silver Surfer makes a bee-line for Earth where he immediately wreaks havoc causing water of the coast of Japan to freeze solid, snow to blanket Egypt and giant craters appear across the surface of the planet. Meanwhile, the Fantastic Four consisting of Reed Richards/Mr. Fantastic (Ioan Gruffudd), Sue Storm/Invisible Woman (Jessica Alba), Ben Grimm/The Thing (Michael Chiklis), and Johnny Storm/The Human Torch (Chris Evans) are spending their time dodging the media and preparing for Reed and Sue’s wedding.
Their old enemy, Victor Von Doom/Dr. Doom (Julian McMahon) who was thought to have died, was really only in suspended animation and has awoken with ideas of world domination. Dr. Doom manages to make contact with the Silver Surfer offering an alliance, but the Silver Surfer refuses.
Alarmed by the strange phenomena occurring across the planet General Hagar (Andre Braugher) approaches Reed for assistance. After the Fantastic Four fail in their attempts to track down the Silver Surfer, General Hagar insists that they work together with Dr. Doom. With Doom and the Fantastic Four’s assistance, General Hagar’s army manages to disarm and capture the Silver Surfer whom they then imprison and torture.
Sue Storm discovers that the Silver Surfer is an unwilling servant of a world-devouring entity known as Galactus, and that only the Silver Surfer has the power to stop Galactus. It is at this point that Dr. Doom reveals his true colours by killing General Hagar and stealing the Silver Surfer’s board (the Surfer’s source of power), which Doom believes will gives him the power needed to rule the planet.
The climax of the film sees Galactus beginning to consume Earth, while the Fantastic Four combine their powers to battle Dr. Doom and the Silver Surfer challenges Galactus.

Fantastic Four: Rise of the Silver Surfer contains stylised comic book action violence and some slapstick violence. There are some scenes depicting more brutal violence and one scene containing images of torture. Examples include:

Children in this age group may also be scared or disturbed by the violence and scary images described above.

Children over the age of thirteen years are unlikely to be disturbed by the scary images depicted in the film.

None of concern, apart from the threatened use of a syringe in the torture scene

The film contains some low level coarse language and putdowns. Example include

Fantastic Four: Rise of the Silver Surfer, based upon Marvel comic books, is a super hero action film. The film targets a young male audience (eight to fifteen years) although some of the film’s jokes are aimed at an older audience. The main messages from this movie are:

This movie could also give parents the opportunity to discuss the use and justification of torture.