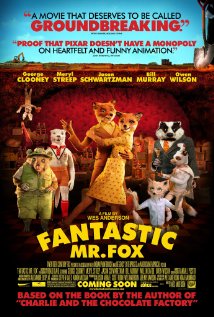 Not recommended under 8, PG to 12 (Violence, scary scenes)

?Mr. Fox (voice of George Clooney) was once a highly successful professional thief who loved stealing chickens from unsuspecting farmers. While trapped with his wife and facing certain death Mr. Fox learns that he is going to be a father and promises Mrs. Fox (Meryl Streep) that if they survive he will find another line of work. Twelve fox years later he is working as a newspaper columnist, living in an underground cave with his wife and son Ash (Jason Schwartzman) and dreaming of bigger and better things.

Deciding to take a risk he purchases a tree house and moves his family to one of the more dangerous suburbs for foxes, located directly opposite property owned by three of the most violent men in the country: Boggis (Robin Hurlstone) a chicken farmer, Bunce (Hugo Guinness) who has a goose and duck smokehouse and Bean (Michael Gambon) who has a cider factory. Mr. Fox cannot help himself and, with the assistance of a trusty accomplice, sets out to do one final job stealing chickens from Boggis’ farm. The success of that mission entices him to try Bunce’s smokehouse and finally Bean’s storage cellar. When the farmers unite to kill Mr. Fox and his family the entire animal population is driven underground in an effort to stay alive.

After days without food or water Mr. Fox hatches a plan which he hopes will save them all. He does not count on the cunning of the humans or on Ash’s attempt to prove himself which ends with his cousin Kristofferson (Eric Chase Anderson) being taken hostage. He is about to hand himself over when his family is threatened by a rat working for the humans. Following a violent struggle and the rat’s death Mr. Fox realizes the value of all life, including his own, and unites all the animals in a last ditch effort to save themselves, rescue Kristofferson and outwit the farmers.

?Most children in this age group are unlikely to be frightened by anything in this film.

Fantastic Mr Fox is a stop motion animation based on the book by Roald Dahl. It offers a slightly different experience when compared to other contemporary films, its colours are less vivid and striking but this gives it a more authentic feel. It is not film for younger children but older ones may enjoy it, especially fans of the book or author.
The main messages from this movie are that it is OK to be different and that everyone has different talents and abilities. The trick is to find them, to believe in yourself and to use them to your best advantage.