Farce of the Penguins 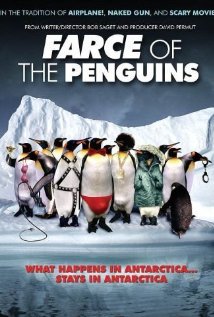 Not recommended under 15 (language, sex, themes)

The movie is a parody of an earlier documentary, the March of the Penguins.  Penguins Carl (voice of Bob Saget) and best friend Jimmy (Lewis Black) embark on a trek 70 miles back to the breeding grounds to begin the next generation of penguins.  On the way, Carl laments how he has always been unlucky in the love department so Jimmy resolves to help him find his “girl”.  On their journey they meet up with a few interesting personalities including other penguins, a snow owl, seals, sea-lions, and a walrus.  Eventually they reach the breeding grounds and Carl finally finds his true love, Melissa (Christina Applegate).  Together they produce a chick and live happily ever after.

Sexuality and sexual behaviour, both animal and human

Children over eight are unlikely to be scared by anything in this film.

Children over thirteen are unlikely to be scared by anything in this film.

There are constant sexual references, many of them crude, including:

There is no use of substances in this movie, however substance use is mentioned including:

There is excessive coarse language in this movie, including:

Farce of the Penguins is a crude parody of an existing wildlife nature movie using actual footage of penguins on their march to the breeding grounds.  It is based on a documentary style with a narrator and minimal subtitles.

The positive messages from this movie, largely overshadowed by the crudity, are the importance of determination, endurance and friendship.

Parents may also wish to discuss the real-life consequences of sexual behaviour and the need to respect the opposite sex.