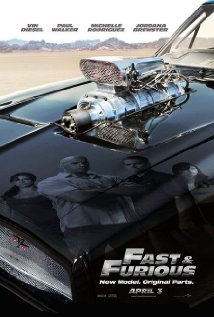 Fast and Furious opens with Dominic Toretto (Vin Diesel), his girlfriend Letty (Michelle Rodriguez) and several co-conspirators hijacking an oil tanker in the Dominican Republic. Following the hijacking, Dom is informed that the authorities are closing in on their hijacking operation and fearing that the situation has become too dangerous for Letty, Dom decides to leave her in the middle of the night.
We next see Dom in Panama City where he receives a phone call from his sister Mia (Jordana Brewster) informing him that Letty has been murdered. Dom returns to the United States to attend Letty’s funeral and avenge her murder. Also attending Letty’s funeral is Dom’s former associate FBI Agent Brian O’Conner (Paul Walker), who is seeking a man named Campos (John Ortiz) who is part of the drug cartel responsible for Letty’s murder.

In an attempt to track down Campos, Brian and Dom independently enter a street race where first prize is a chance to become a drug courier driver for Campos. Dom wins the race and gains entrance to the drug cartel while Brian is left out in the cold. However, Brian arranges for one of Campos’s other drivers to be arrested on a trumped up drug charge, allowing Brian to be called in as a replacement driver. Four drivers including Dom and Brian, each carrying a boot load of heroin, speed across the Mexican desert to deliver their cargo of drugs to the US. On arrival instead of paying off the drivers, Campos attempts to murder them. Dom and Brian manage to escape and now team up to fight the criminals.

Apart from the violence described above, there are no additional scenes likely to disturb children in this age group.

Fast and Furious contains several scenes depicting the consumption of alcohol and references to drug trafficking and distribution. Examples include:

Fast and Furious contains medium level coarse language and name calling scattered throughout. Examples include:bet your arse; shit; break your arse; piss them off guys; Jesus; goddamn; pull my arse up; keep your shit in line; nut sack; idiot; pussy; get into the fucking car.

Fast and Furious, fourth instalment in this series is an action adventure targeted at adolescent males between the ages of thirteen and twenty years.
The main messages from this movie are that:

Values in this movie that parents may wish to reinforce with their children include courage, perseverance, determination and resilience as shown by Dom.
This movie could also give parents the opportunity to discuss with their children attitudes and behaviours, and their real-life consequences, such as whether revenge can be justified.