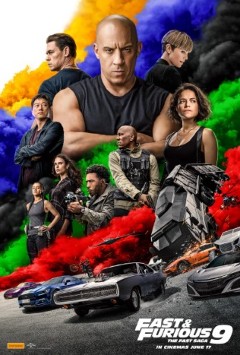 Not suitable under 13; parental guidance to 15 (violence, language, themes)

Attempting to live life off the grid with his girlfriend Letty (Michelle Rodriguez) and young son, Dominic “Dom” Torreto (Vin Diesel) is approached by his former associates Ramsey (Nathalie Emmanuel), Roman (Tyrese Gibson) and Tej (Chris ‘Ludacris’ Bridges), who were all sent a message with footage of a plane being attacked by rogue agents. They ask for help to investigate the crash site and, while Letty agrees, Dom refuses. However, Dom changes his mind after glimpsing a clue in the footage that leads him to suspect that his estranged brother, Jakob (John Cena), might have something to do with the hijacking. Dom and his team soon learn that the plane was carrying half of the Aries system, a specialized device that can hack into any computer weapons system and give the user total control from anywhere in the world. When the first piece is stolen from them, Dom and his team set off to try to stop Jakob, his associate Otto (Thue Ersted Rasmussen) and the rogue army they have enlisted to help them steal the second half of Aries. The group splits up in order to follow different leads. Letty and Dom’s sister Mia (Jordana Brewster) track down their old pal Han (Sung Kang) in Tokyo, where, after faking his death, he has been protecting Elle (Anna Sawei), who is the key to Aries. At the same time, the others head to Scotland to try to get the second piece before Jakob does, while the evil villain, Cipher (Charlize Theron), teams up with Otto and plans are set in motion to hijack a satellite using the Aries system. With everything against them, Dom and his team race against the clock, to places they have never been, and risk everything to disarm Aries and bring relative safety back to the world.

Fast & Furious 9 is a fast-paced action film, the 9th in the Fast & Furious Franchise. The film features lots of stunts and special effects but a fairly predictable plot. Due to the violent content and coarse language, this is not a family film but rather one that will best be enjoyed by mature audiences and fans of the Fast and Furious series.

The main messages from this movie are that you need to make peace with the past if you want to have hope for the future; that family is priceless; and that it is not about being stronger or faster, it is about being the bigger or better person.