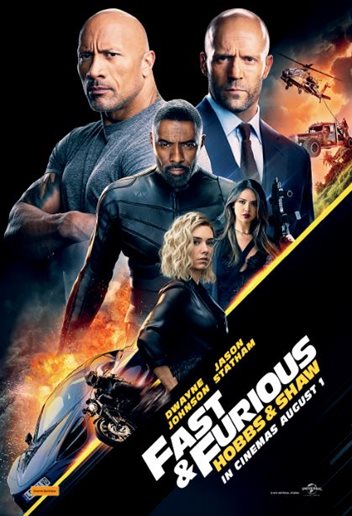 Not suitable under 13, parental guidance to 15 (violence, language, sexual references)

When MI-6 field agent Hattie (Vanessa Kirby), sister of mercenary Deckard Shaw (Jason Statham), is framed for killing her field team and stealing a deadly virus, Shaw and Luke Hobbs (Dwayne ‘The Rock’ Johnson) must team up to save her and the world.  The unlikely duo face the fight of their lives against a cyber-genetically enhanced ghost from Shaw’s past, Brixton (Idris Elba), who wants to ‘upgrade’ the best of humanity and eliminate the weakest.

Fast & Furious: Hobbs & Shaw is the first in the spin-off series from the Fast & Furious franchise.  While funny and action-packed, this movie is a fairly ‘paint-by-numbers’ action-comedy with frequent violence, high speed car chases and sexualised depictions of women.  This movie is not appropriate for children under 13 due to violence, coarse language, and sexual references.  Parental guidance is recommended for children under 15.

The main message from this movie is that working together, even with those we may not like, allows us to achieve great things.