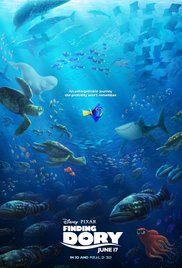 Not suitable under 6; parental guidance to 8 (scary scenes and themes)

Finding Dory takes us back to the colourful under-sea world of the film Finding Nemo. It tells the story of Dory (Ellen DeGeneres), a Pacific Regal Blue Tang fish with short-term memory loss, how she came to lose her family and her exciting adventure to find them.

Dory is happy living with her friend Marlin (Albert Brooks) and his son Nemo (Hayden Rolence) in a safe community on the Great Barrier Reef. Although she has short-term memory loss, she sometimes remembers snippets of life with her mother and father. One day, when out on a school excursion, Dory is swept away by a swift current and is thrown to the ground. The fall jolts her memory and she remembers where her mother and father live. She immediately convinces Marlin and Nemo to accompany her in the search for her long lost family.

The search brings them to the Monterey Marine Life Institute in California. They become separated and whilst Dory is busy trying to find her parents, Nemo and Marlin try to find Dory. Her new friends, Hank the octopus (Ed O'Neill), Destiny the whale shark (Kaitlin Olson) and Bailey (Ty Burrell) a Beluga whale, help Dory in her search.

As Dory's memories about her past and the separation from her parents return to her, she uses her memories and her instincts to find her mother and father. She must then try to reunite with Marlin and Nemo and she enlists the help of her parents and her new friends.

Separation from family and loss of loved ones; death; living with a disability or something that makes you different; dealing with traumatic events or memories from the past; trusting your instincts

Finding Dory includes some scenes of slapstick violence as well as scenes where sea creatures are threatened by either larger predators or humans. Examples include:

Children in this age group may also be disturbed by the above-mentioned scenes and may wish to discuss some of the themes presented in the film.

Children of this age are unlikely to be disturbed by anything in this film but may wish to discuss the themes in this film.

None of concern in this film, however there is a lot of associated merchandise available

There is some mild teasing in this film, but it doesn't include name-calling, and there are some substitute swear words, but  these are unlikely to be imitated by small children

Finding Dory is a beautiful animated adventure film with some powerful positive messages to discuss with children. It is entertaining and fun for adults as well as children. There are, however, themes of parental loss and separation and some scary scenes which younger children may find very frightening. It is not recommended for under 6s with parental guidance recommended for children aged 6 to 8. Parents may also wish to discuss some of the film’s themes with over 8s.

Parents may also wish to discuss how animals are treated in captivity and what the film says about this.