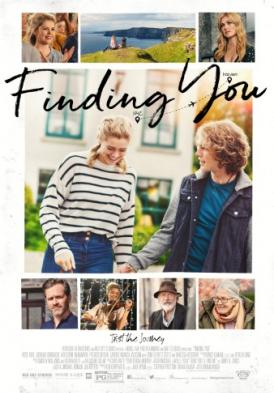 Not suitable under 10; parental guidance to 13 (themes, language, fantasy violence)

After being rejected from the New York music conservatory, Finley Sinclair (Rose Reid) abruptly decides to follow in her dead brother’s footsteps and go on an exchange to Ireland hoping to find some of the magic that he found there and hoping to use the opportunity to improve her playing and audition again. By chance, Finley is seated next to Beckett Rush (Jedidiah Goodacre), a famous movie star who is shooting a film near where she is staying. Unimpressed by his arrogance and the little she knows of him, Finley is more than happy to say good-bye at the end of the trip but, as luck would have it, he is staying in the Inn run by Finley’s host family. After she helps him run lines and improve his performance, Beckett helps Finley win over the bitter and angry Cathleen Sweeny (Vanessa Redgrave), who is the elderly companion that Finley is matched with and who becomes integral to her passing her Irish studies. As Finley and Beckett become friends, stronger feelings begin to emerge but they are hampered by Beckett’s father/manager (Tom Everett Scott) who sees Finley as a dangerous distraction; and by Taylor (Katherine McNamara), Beckett’s leading lady who, as far as the world can tell, is also his girlfriend. While Finley searches for the meaning of a message left by her brother; tries to mend the rift between Catherine and her estranged sister; and attempts to capture the magic of Ireland in her music, Beckett must find the courage to face his father and stand up for what he truly wants and who he truly wishes to be.

Rejection; Death of a family member; Drawbacks of fame; Family dysfunction; The dangers and power of social media; Holding grudges; The hardships of child actors; Town gossip; and on a lesser note, Domestic abuse.

Finding You is an innocent, romantic film that focuses not so much on finding love as it does on finding yourself. Based on the novel, There You’ll Find Me, by Jenny B Jones, the film provides an excellent role model for girls, specifically in relation to the lead character who is resilient, responsible and kind, who displays courage in the face of defeat and is not impressed by social standing, fame or money. This is a family film for those with older children and is likely to be enjoyed by adults and teens and tweens alike.

The main messages from this movie are to not be afraid or discouraged by the changes and chances of life for we are never truly alone; and that we should always look deeper, for things are not always as they may at first appear.