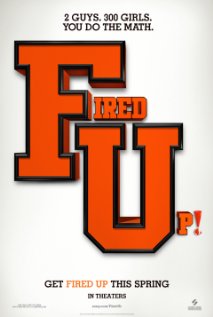 Not suitable under 13, Not recommended under 15 (Sexual references and behaviour, Teenage alcohol use, Coarse language)

High-school buddies Shawn (Nicholas D’Agosto) and Nick (Eric Christian Olson) decide that rather attending the annual summer football camp, they will join the school’s cheerleaders team the “Tigers”. They enlist the aid of Shawn’s sister Poppy (Juliette Goglia) to teach them some basic cheerleading moves and, after a staged display of their newly acquired skills, make it on to the team. However, the head cheerleader Carly (Sarah Roemer) mistrusts the pair, rightly believing them to be there for only one reason: scoring girls.
At cheerleaders camp, Shawn and Nick have no trouble winning the affections of the cheerleaders and make many conquests. While Nick lusts after the camp coach’s wife Diora (Molly Sims), Shawn finds himself becoming seriously attracted to Carly, who after some initial hesitation begins to respond to Shawn.

Unfortunately for Shawn, Carly’s boyfriend, a pre-med student, who calls himself Dr. Rick (David Walton) arrives on the scene, making it clear that he wants Shawn to stay away from Carly. Dr. Rick steals Nick’s diary which details Shawn and Nick’s plans to abandon cheerleader camp once they have had their fill of cheerleaders and uses the diary to expose them. Carly, who is furious with Shawn for betraying her and the team, orders both Shawn and Nick to leave immediately.
Shawn and Nick then have to work hard to get back into the squad.

Fired Up contains some slapstick violence and accidental harm. Examples include:

Apart from the above-mentioned violent scenes, it is unlikely that anything in this film would disturb children of this age.

Apart from the above-mentioned violent scenes, it is unlikely that anything in this film would disturb children of this age.

It is unlikely that anything in this film would disturb children of this age.

It is unlikely that anything in this film would disturb children of this age.

Fired Up parodies product placement in sports but some real products are also displayed, including

While Nick and Shawn appear obsessed with engaging in as many sexual escapades as possible, their engagement in sexual acts is implied rather than depicted. The film contains some nudity and brief clothing. Examples include:

Fired Up contains implied substance use (alcohol), brief references to drug use, and behaviour that infers intoxication:

Fired Up contains frequent coarse language and putdowns. Examples include:

Fired Up is a high school sex comedy that targets a teenage audience and is likely to appeal to older adolescents, although the lead actors look older than the teenagers they are playing.
The main messages from this movie are that:

This movie could also give parents the opportunity to discuss with older children attitudes and behaviours, and their real-life consequences, such as the promiscuous behaviour of the film’s lead characters and their attitude to women