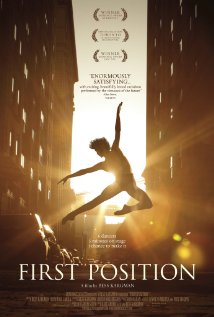 Not recommended under 8, parental guidance to 10, due to some disturbing themes

Bess Kargman’s First Position is a feature-length documentary following the journey of six young dancers as they prepare for a prestigious ballet competition, the Youth America Grand Prix.  Nine- to 19-year-old dancers compete through a series of rounds, with only 300 hopefuls making it to the finals in New York. Focusing on the stories of six individuals, the film offers a glimpse into the varied cultural and training backgrounds of the competitors.

Joan Sebastian Zamora is a sixteen-year-old from Colombia, whose parents sent him to American to train with a renowned dance mentor. Twelve-year-old Miko Fogarty and her younger brother both have dreams of becoming professional dancers, and have moved across the country to both train and compete. Michaela DePrince, a fourteen-year-old born in Sierra Leone during the civil war, is still haunted by the loss of her parents and the devastation she saw as a child. However, her love for dance has helped her cope, despite struggling through endless obstacles and injuries. Seventeen-year-old Rebecca Houseknecht has everything going for her, and hopes to skip college in order to go directly into working for a professional dance company, but the scarcity of jobs has made progressing in her career difficult thus far. Friends Aran Bell and Gaya Bommer have both travelled the world to follow their passion, and are equally determined to win their respective age categories and gain scholarships to exclusive dance schools.

Throughout the film, these six dancers face continual challenges, fight through exhaustion and injury, and sacrifice much of their childhoods in order to follow their dreams.

There is no visual violence, but there are stories of violence in this movie including:

In addition to the above-mentioned violent scenes and scary visual images, there are some scenes in this movie that could worry children under five, including the following:

Children in this age group may be particularly disturbed by Michaela’s stories of what happened to her parents and teacher.

Aran’s ballet teacher is briefly seen smoking a cigarette while teaching his class.

First Position is a compelling film that offers viewers a glimpse into the challenging world of ballet. It focuses on the stories of the six young dancers, the sacrifices both they and their families have made to allow them to follow their dreams, and their dedication, tenacity and determination. The dancers triumph over injuries and fatigue, and face stiff competition from around the globe. However, they do not always achieve the goals they set out to accomplish – whether that is obtaining scholarships to prestigious dance schools, or winning first place in their age categories. The film aims to present a realistic view of the world of dance, both in regards to the incredible satisfaction experienced by the dancers, but also the moments in which the young individuals question their choice to continue.

The film is probably of most interest to children over 8, but includes some descriptions of violence in Sierra Leone and some scenes of the physical toll on the dancers that might disturb younger children. Parental guidance is therefore recommended for 8-10 year olds.