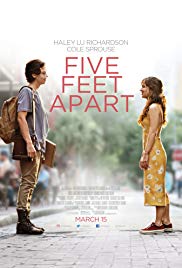 Not recommended under 13 and parental guidance to 15 (Language, sexual references, distressing scenes).

Five Feet Apart gives audiences a glimpse into the life of 17-year-old Stella (Hayley Lu Richardson), who suffers from cystic fibrosis (CF) and is back in the hospital waiting for a lung transplant. It is here that she meets Will (Cole Sprouse), a headstrong, young, artist also suffering with CF but carrying a deadly bacteria as well. With the support of Po (Moises Arias), a homosexual teenager, fellow CF patient and long-time friend of Stella, they strike up an unlikely friendship that soon leads to romance. Stella helps Will find hope and teaches him to follow his treatment schedule; while Will shows Stella how to embrace life, take chances and live in the moment. CF suffers must always stay at least 6 feet away from each other so that they do not make each other sick, but Stella and Will decide to steal a foot back and only remain 5 feet apart as CF has already stolen so much from them. Repeated acts of kindness from both sides show their relationship grow from friendship to love and despite nurse Barb’s (Kimberly Hebert Gregory) best efforts to keep them in line and keep them apart, Will and Stella show everyone the depth of their devotion to each other and what they are willing to sacrifice not only for love, but also for life.

Aside from the constant threat of death handing over the main characters’ heads there is nothing in the film that would frighten children over the age of 13.

There is occasional coarse language in this movie, including:

Five Feet Apart is a romantic, heart wrenching drama about young love that cannot be. It highlights the plight of patients living with Cystic Fibrosis and will appeal to adult and teenage audiences. While the plot is somewhat predictable, the acting is top notch and messages are both purposeful and empowering.

The main messages from this movie are to seize every moment and to truly live your life, to value your time because you never know when it will run out, to show kindness and empathy towards others, to love your family and friends with all your heart and to hug them if you can, to realise the importance of human touch and never take it for granted.

This movie could also give parents the opportunity to discuss with their children the importance of following medical advice and taking precautions as there can be fatal consequences for failing to follow those rules.