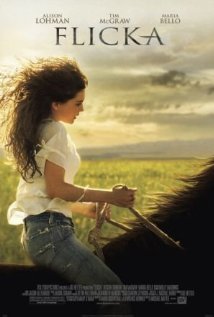 Short takes: Not recommended under 8, PG to 13 (Disturbing scenes and themes)

Flicka is a classic story about the relationship between a girl and a horse. It is loosely based on the story written by Mary O'Hara in 1941 called "My Friend Flicka.”.

Sixteen-year-old Katy (Alison Lohman) lives on a big ranch in Wyoming. The film opens with her daydreaming through a history exam and ultimately failing the subject. She returns home and goes for an early morning ride, worried about telling her parents, particularly her father (Tim McGraw), about her failure. While out riding, Katy comes face to face with a beautiful black mustang.

From then on Katy is obsessed by this horse and, though banned from searching for it, does so anyway. Finally it is caught by her father and brought back to the ranch. Although expressly forbidden to, Katy secretly tries to tame the horse which she names Flicka, and all seems to be going well until she is thrown off. Much to her dismay and the dismay of the rest of her family, her father sells the horse. Katy then works out an elaborate plan with her brother (Ryan Kwanten) and his girlfriend (Kaylee de Fer) to get Flicka back.

There is no overt violence in this movie however there are confrontations between various members of the family that involve yelling. Also there are some rodeo scenes where people fall off either bulls or horses.

Children in this age group could also be concerned when the mountain lion attacks Flicka, Katie is injured and Flicka’s life is threatened.

It is unlikely that any scenes in this movie would scare children over the age of thirteen.

There is some smoking and drinking in a bar scene

There is some coarse language including:

Flicka is a movie that many children, particularly girls who are interested in horses, will enjoy. The movie’s message is that you need to fight for what you love and that if you do, good things can happen. Values in this movie that parents may wish to reinforce with their children include:

Parents may be concerned that Katy reaches her goal by continually doing the opposite of what her father wants and there is a lot of conflict as a result. Parents could point out that there may be a more positive way for parents and children to resolve issues and still get a positive outcome.