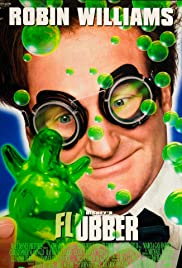 Professor Philip Brainard (Robin Williams) is a genius and hopelessly chaotic inventor and scientist, and he is under a lot of pressure: He desperately needs to come up with a ground-breaking and lucrative invention if he wants to save his college from being closed down; and he needs to fend off his arch rival, Wilson Croft (Christopher McDonald), who is not only trying to steal his ideas but also his fiancée Sara (Marcia Gay Harden). Then something amazing happens! One of Philip's experiments produces a mysterious green goo, which has incredible elastic and bouncy qualities, is an enormous source of energy, but also has a mind of its own. Philip's robot assistant Weebo (voiced by Jodi Benson) describes it as flying rubber, which inspires Philip to name his invention "Flubber". However, along with Flubber come new challenges. Philip needs to learn to control his bouncy goo, protect it from getting into the wrong hands, and win back Sara's heart after he stood her up at the altar for the third time whilst getting distracted over inventing Flubber.

In this movie humour is excessively derived from slapstick violence, and what is problematic is that in many instances the movie grossly trivialises the effects of some of the violent misadventures. Examples include:

Flubber is a 1997 science fiction action comedy, produced by Walt Disney Pictures. While Robin Williams shines and the story (based on the 1961 film The Absent-Minded Professor) is captivating, the excessive use of slapstick humour and associated violence, and the lack of criticising or rectifying immoral actions (cheating, stealing, using violence) makes the film unsuitable for children under 6 and warrants parental guidance for children under 9. Best suited to a family audience with children aged 9 and over.

The main messages from this movie are that it is important to persist and not to get defeated and give up when confronted with setbacks.