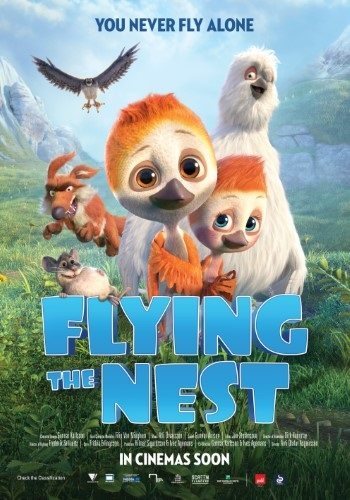 Not recommended under 5 and parental guidance to 8 (Scary scenes and Violence).

Ploey (voice of Jamie Oram) is a plover chick who lives with his Mum and Dad and his best friend Ploeveria (voice of Harriett Perring). Life is hard for the plovers with the ever-present threat of being attacked by vultures and other predators, in particular a huge vulture called Shadow (voice of Richard Cotton). Shadow and the other vultures eagerly await the return of the plovers each Spring for their food. The plover chicks have to learn how to dig for worms themselves and how to fly. Unfortunately Ploey is afraid to fly. One day while plucking up the courage to fly, Ploey gets taken by Shadow. Ploey’s Dad comes to his rescue, but sadly is taken by Shadow in his place.

When it comes time for the birds to migrate south, Ploey gets left behind. He decides to walk to Paradise Valley where the birds go to wait out the Arctic winter. Ploey meets many dangers along the way, including blizzards, foxes, avalanches and ice drifts. He also meets Giron (voice of John Stamos), a large white bird, who saves Ploey on several occasions, and Mousy (voice of Graham Dickson), who comes to his aid too. Ploey finally reaches his destination where he is reunited with his Mother and Ploeveria. On return to their Spring home, Ploey has the opportunity to take revenge on Shadow.

Animals in peril; migratory birds; prey and predators; death of a parent.

Flying The Nest is an animated adventure story of a young migratory plover chick who has to find Paradise Valley on his own. The predatory nature of some of the animals is quite scary for very young children and there is a moderate level of violence in this movie. Parental guidance is therefore recommended for children aged 5-8.

The main messages from this movie are to believe in yourself and to overcome your fears.