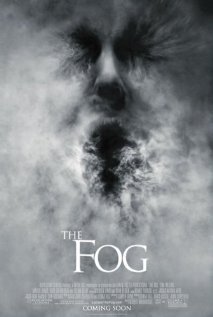 Not recommended under 15 (Viol. Scary scenes)

The film’s opening scene, set in the 1870s, depicts four men in a row boat rowing away from a burning sailing schooner from which people, themselves in flames, are jumping into the ocean.
The film then jumps to the present day where the small Oregon community of Antonio Island is preparing to celebrate the unveiling of four statues honouring the town’s legendary heroic founding fathers (the four from the rowboat in the opening scene). Soon strange events begin to occur, antique heirlooms begin to wash up on the beach and an unnatural fogbank develops off shore. The fog surrounds a charter boat and supernatural forces hidden within the fog kill three of the boat’s four occupants leaving the fourth to be found the next day barely alive in the boat’s freezer.

Among the townspeople are charter boat skipper, Nick Castle (Tom Welling), Nick’s ex-girlfriend, Elizabeth Williams (Maggie Grace) and Stevie Wayne (Selma Blair), all of whom are descendants of the founding fathers. When Elizabeth finds an old journal written by one of founding fathers she uncovers a dark secret that the Island’s prosperity was built upon gold stolen from a group of wealthy lepers, who the founders murdered by setting their schooner on fire. The malevolent spirits of the dead lepers, led by the ghostly Captain Blake (Rade Sherbedgia) are The Fog, and are back to wreak revenge on the descendants of the murderous founding fathers.

In addition to the above mentioned violent scenes, there are some scary scenes in this movie that could seriously disturb children under the age of five, including:

Children in this age group may also be scared or disturbed by scenes described above.

All of the violence, scary visual images and threatening situations described above could also scare or disturb children between the ages of eight and thirteen years.

Many children in this age bracket could also be scared by the violence, scary visual images and suspense of this movie.

The film contains a few sexual references, including:

There is no nudity, but some scantily clad women, including:

There is one scene in which there is sexual activity: Elizabeth and Nick are naked in the shower being passionately intimate. Many of the images are shot through the glass of the shower cubicle providing a distorted view of the pair and with one quick glimpse of one Elizabeth’s breasts. Clearer images of the pair without the distortion of the glass show them rubbing their hands up and down each other’s backs and passionately kissing. Side and back views of their upper torsos only are shown.

The film contains infrequent instances of substance use, including:

The film contains only a few instances of mild coarse language, including:

The movie’s main message is about revenge for past misdeeds and a present generation coming to terms with the truth behind the murderous acts committed by their forefathers. There are no worthwhile or meaningful values for parents to discuss.