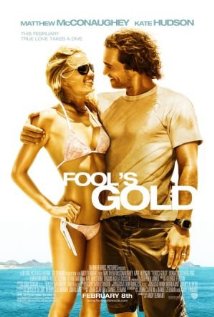 Not suitable under 13, PG to 15 (Violence, Themes, Sexual references)

The film opens with treasure hunter, Ben “Finn” Finnegan (Mathew McConaughey) searching the seabed for sunken treasure. While he is underwater, Finn’s boat catches fire and sinks. The loss of his boat leaves Finn owing a large sum of money to local loanshark and all round bad-guy Bigg Bunny (Kevin Hart), who subsequently orders Finn’s execution. Finn is chained to an anchor and dropped into the deep ocean.

Finn is able to free himself and reach land just in time to rush into court for his divorce from his wife Tess (Kate Hudson). Outside the court, Finn tries to persuade Tess that he has finally found the location of the sunken Spanish treasure ship for which they have been searching for the last eight years, but Tess is unconvinced.

Tess, who never wants to see Finn again, works as a steward aboard a luxury yacht owned by billionaire Nigel Honeycutt (Donald Sutherland), who is currently being visited by his estranged daughter Gemma (Alexis Dziena). Through a series of events involving Gemma, Finn ends up as a guest on the same yacht. He persuades Nigel and Tess that he really does know where the sunken treasure ship is located, and Finn, Tess, Nigel and Gemma are soon chasing after sunken treasure.

Bigg Bunny, after learning of Finn’s find, is also after the treasure and hires Finn’s old mentor and rival, Moe Fitch (Ray Winstone) to find the treasure before Finn. The scene is thus set for an exciting and action-packed race.

Numerous scenes of violence, both slapstick and more brutal, include:

Children in this age group are also likely to be disturbed by many of the scenes listed above.

Children in this age group may also be disturbed by some of the scenes listed above.

Fool’s Gold contains some nudity and sexual activity. Examples include:

Fool’s Gold is a romantic action comedy which is likely to appeal to older adolescents and adults. There are few positive values in this film for parents to reinforce. Finn appears to be a man of mixed qualities, driven by his obsession with finding the treasure.

This movie could give parents the opportunity to discuss with their children attitudes and behaviours, and their real-life consequences, such as: