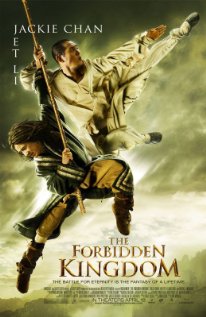 Not recommended under 13, PG to 15 due to frequent action violence and some coarse language

Jason Tripitikas (Michael Angarano) is a teenager with a great passion for Kung Fu films, which he buys from a dusty old shop in Chinatown run by an old Chinese man called Old Hop (Jackie Chan). Old Hop has an antique Chinese fighting staff, which, he tells Jason, has been in the shop for more than a hundred years, and will one day be claimed and returned to its rightful owner.
While walking home after visiting Hop’s shop, Jason is set upon by a group of local bullies. The leader of the bullies Lupo (Morgan Benoit) forces Jason to deceive Old Hop so the gang can get inside Old Hop’s shop to rob it. During the robbery Old Hop is shot in the chest and, while lying on the floor, gives Jason the staff, telling him that it is he who must return the staff to its rightful owner. Jason is pursued by Lupo and his gang but, through the magic of the staff, finds himself being pulled away from the gang. He is hurled off a rooftop, but before he hits the ground the film blacks out.
When Jason wakes up he finds that he has been transported back in time to a small village in China where he is befriended by a wine soaked beggar named Lu Yan (also played by Jackie Chan). Through narration and imagery Lu Yan tells Jason the story of the Monkey King, an immortal who was deceived and turned to stone by the Jade Warlord (Collin Chou), an evil immortal who has caused much death and destruction. For the Monkey King to be set free his magical staff must be returned to him by the Seeker. Lu Yan then tells Jason that he is the Seeker who must return the staff to The Monkey King. To free the Monkey King, Jason must outrun a witch and the Jade Warlord’s henchmen, cross a desert and find the Jade Warlord’s palace at the top of “Five Elements Mountain”. Jason sets off with Lu Yan and they are joined by Golden Sparrow (Yifei Liu) a girl seeking vengeance against the Jade Warlord, and a mysterious silent monk.
During their journey the Jade Warlord’s witch Ni Chang (Bingbing Li) confronts Jason and his friends. Although the group manages to escape, Lu Yan is shot in the back by a magical arrow. Jason believes that the only way to save Lu Yan’s life is for him to go to the Jade Warlord and offer him the Monkey King’s staff in exchange for the Elixir of Life. Jason makes it to the Jade Warlord’s palace, but instead of receiving the Elixir of Life, he is challenged to a “fight to the death” by the witch Ni Chang. When it appears that Jason has lost, Golden Sparrow, the Silent Monk and a host of Kung Fu monks arrive and do battle.

Most of the violence depicted through Forbidden Kingdom is heavily stylised action violence with minimal blood and gore. At other times the violence is intimidating and realistic. Examples include:

Forbidden Kingdom is an action, adventure fantasy film that features the martial arts skills of the film’s two major stars Jet Li and Jackie Chan. Fans of Chan and Li will not be disappointed with their performance, and all of the film’s cast members perform well.
The main messages from this movie are that:

Kung Fu is a way of life and thinking that can be applied to every aspect of life.
Values in this movie that parents may wish to reinforce with their children include: