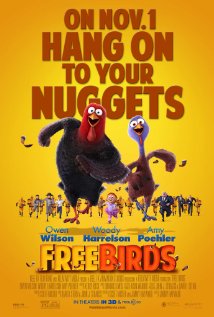 Reggie the turkey (voice of Owen Wilson), the smartest turkey in the flock, has spent his life warning the rest of the flock to wise up and realise that they are being fattened up for the Thanksgiving menu. But the rest of the flock, who are not quite as switched on as Reggie, believe that they are being taken to turkey paradise rather than the slaughter shed. Thanks to the President’s young daughter (voice of Kaitlyn Maher), Reggie ends up being chosen as the annual Pardon Turkey and is taken back to Camp David where he lives a life of leisure watching TV, eating pizza and wearing slippers.

Reggie’s life of pampered pleasure comes to an abrupt end when he is kidnapped by a fanatical turkey named Jake (voice of Woody Harrelson), who is a member of the Turkey Freedom Front. Apparently Jake has been sent on a mission by the “Great Turkey” to find Reggie, go back in time and change history, so that turkeys are no longer on the Thanksgiving menu .

Through a combination of determination and a comedy of errors, Jake and Reggie manage to end up in an experimental time machine named S.T.E.V.E. (voice of George Takei) and are transported back to Plymouth in 1621, three days before the first Thanksgiving. There they become involved with a flock of native turkeys led by Chief Broadbeak (voice of Keith David) and his charming daughter Jenny (voice of Amy Poehler). Unfortunately for Reggie and Jake they find that they have gone from the frying pan into the fire because the native turkeys are battling for survival against a ruthless hunter named Myles Standish (voice of Colm Meaney). He is on a mission to round up and capture the wild turkeys for the first Thanksgiving feast.

The film contains cartoon violence scattered throughout, some action violence and peril, some violence involving gun and cannon fire, and the death of a main character. Examples include:

Children in this age group may also be scared by the above-mentioned violent and scary scenes.

Nothing of concern in the film, but associated merchandise being sold.

The film contains a few low-level sexual references. Examples include:

Unspecified drinks on the table at a Thanksgiving dinner.

The film contains occasional exclamations and name calling that young children may imitate. Examples include:

Free Birds is an animated adventure comedy that portrays the story of the very first Thanksgiving holiday from a turkey’s perspective. Older children are likely to be entertained by the talking animals and lots of cartoon humour but, despite the G rating, there are a number of violent and scary scenes which are likely to scare under 6s and some older children. Parents may need to explain the film's plot. Children may find the film’s time travel confusing and the plot may be even more confusing for Australian children who are unfamiliar with Thanksgiving holiday customs.