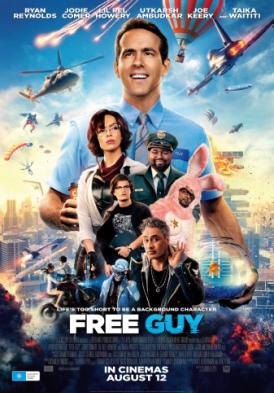 Every day, Guy (Ryan Reynolds) wakes up and follows the same routine: get coffee, meet his best friend Buddy (Lil Rel Howery), walk to work, work at the bank, go home – and repeat. Even though it is monotonous and predictable, Guy loves his life and, despite all the crazy violence, thinks Free City is a fabulous place to live. It never occurs to Guy that his life may not be real. He never imagines that he is really just a NPC (a ‘non-playable character’ who is made of code and written into a video game). Guy’s life changes when he sees Molotov Girl (Jodie Comer) for the first time. Molotov Girl is a player whose real life persona, Millie (Jodie Comer), is searching for a way to win a law suit against Antwan (Taika Waititi), the greedy owner of a gaming corporation, and prove that the code she and her partner, Keys, created was stolen and used as the basis for the game, Free City. Desperate to talk to Molotov Girl, Guy breaks protocol and follows her. She is well out of his league but gives him some friendly advice about how to level up, thinking he is just another player. Guy takes her advice and becomes not only a good guy but a great guy, helping everyone he sees and levelling up more quickly than anyone thought possible. Guy becomes a worldwide phenomenon, making the news in the real world, as everyone wonders who this incredibly talented player could be. By the time Millie realises that Guy not only holds the key to getting the evidence to win her lawsuit but that he is the key, Antwan has worked out her secret persona and realises what she is up to. Antwan then pulls out all the stops in a last ditch effort to eliminate Guy, destroy Free City and eradicate all evidence of the game. It comes down to Guy who must fight for what is real, even if what is real only lasts for a moment.

Free Guy is a sci-fi, action comedy with a fast paced plot and an excellent cast. The film features lots of special effects and videogame-style technology but due to the mature content it is best suited to older teens and adult audiences.

The main messages from this movie are that kindness is far more powerful than violence; and that life doesn’t have to be something that just happens to us – we can decide what we want to be, how we want to be and who we want to be.