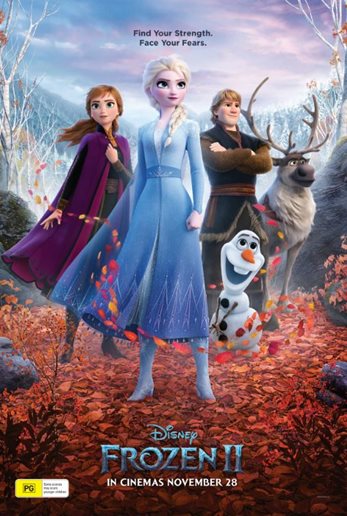 Not suitable under 6; parental guidance to 8 (themes and scary scenes)

While doing her best to run the Kingdom of Arendelle, Elsa (Idina Menzel) finds herself repeatedly listening to a siren call that only she can hear. One night she answers back and sets in motion a chain of events that see her, Anna (Kristen Bell), Kristoff (Johnathon Groff), and Olaf (Josh Gad) on a journey to Northuldra and to the enchanted forest their father and mother once told them of in a bedtime story. It is here that the sisters begin to learn the truth about the native people that live there, about the dark secret that hangs over their family, about the source of Elsa’s powers and about what really happened to their parents all those years ago. Despite Anna’s best attempts to protect her, Elsa sets off alone to confront the past and find her destiny while Anna learns to face her worst fears and what it takes to be a true leader. Once again, the sisters are able to weave their magic, free the people of Northuldra and save not only Arendelle but also each other.

Death of parents, siblings and friends, natural disasters, angered spirits of an enchanted forest, cultural superiority of one group over a native people.

Frozen 2 is an animated, musical, sequel to the 2013 blockbuster film Frozen. Some scenes are a little darker but the characters are just as developed and endearing. Frozen 2 is a family film that will likely be enjoyed by all but the youngest of viewers.

The main messages from this movie are to believe in yourself; to keep on doing the right thing even when it feels impossible to go on; to see the value in cultures and beliefs that are different from your own; and to work towards building bonds of friendship, understanding and unity.