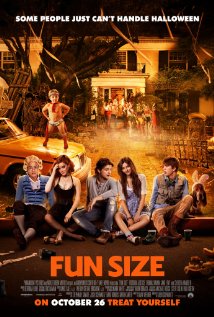 Not suitable under 10, PG to 13 (Themes; Sexual references; Coarse languages)

Fun Size is a teenage comedy drama about Wren (Victoria Justice) a teenager who is grieving the death of her father a year previously.  Wren’s family members are all struggling to manage their grief.  Her mother (Chelsea Handler) is avoiding her feelings by dating a 26 year old and her 8 year old brother, Albert (Jackson Nicholl), has stopped talking and is finding refuge in eating sweets.

Wren is momentarily distracted from her dysfunctional life when she is invited to a Halloween party by the coolest boy at school, Aaron Riley (Thomas McDonnell).  At the last minute however her mother leaves her responsible for her little brother for the night so her party plans are abandoned.  Wren and her best friend, April (Jane Levy) begrudgingly take Albert trick-or-treating but while they are out on the busy Halloween streets, Wren loses sight of Albert and is unable to find him in the sea of trick-or-treaters.

In a panic Wren calls upon her geeky friends Roosevelt (Thomas Mann) and Peng (Osric Chau) to help them find Albert.  Meanwhile, Albert has some Halloween adventures of his own as he meets many colourful characters while finding his way home.

Death of a father and family grief; a child missing and in dangerous situations

Children in this age group may also be disturbed by Albert’s misadventures, in particular when he is shoved, grabbed and locked away by a man who has drunk a lot of alcohol.

Fun Size is a teenage comedy drama about a girl whose Halloween plans are foiled when she is landed with her troublesome little brother for the night, and the two find some unexpected Halloween adventure. The themes of a grieving family and a young boy lost and facing possible danger, together with sexual references and coarse language, make it unsuitable for under tens and many parents may not wish their tweens and younger teens to see it.

The main messages from this movie are being true to yourself and sticking by your family.