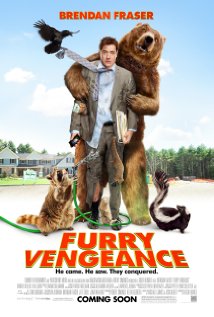 Not recommended under 5, PG to 10 (Violence, Scary scenes)

Furry Vengeance is a children’s comedy directed by Roger Kimble.  The film follows the story of Dan Sanders (Brendan Fraser), who moves his family from Chicago to the remote Oregon town of Rocky Springs for a year, while he manages a property development project for Leyman Enterprises.  Although Sanders considers this position an opportunity to improve the family’s financial security, his wife, Tammy (Brooke Shields) and son, Tyler (Matt Prokop) feel isolated and unhappy in their new surroundings.  It also soon becomes apparent that Neil Leyman (Ken Jeong) is a tyrannical and unethical boss, with no qualms about destroying native environments for profit, despite the supposedly “green” nature of his company.

As Dan focuses on meeting Mr. Leyman’s escalating demands, Tammy and Tyler become increasingly dissatisfied with their lives in Rocky Springs.  Another emerging problem is that the local forest animals have begun acting together to fight the land development that will destroy their homes.  They devise countless ways to sabotage the project and make Dan’s life miserable.  As Dan becomes increasingly disturbed by the animals’ cunning and often malicious actions, his family and work crew begin wondering if he has developed psychological problems.  The situation escalates until Dan is forced to re-evaluate his current priorities and ultimate life goals.

This film involves the themes of loneliness, isolation and relationship breakdown. In addition, although intended to be comedic, there are several references to war and recurring negative references to mental illness and dementia.

Some products are used in this movie, such as Apple computers. In addition, there is a brief musical reference to the Mission Impossible theme. There is also mention of Bruce Lee and Hannah Montana, and fleeting visual references to films such as The Blue Lagoon, Grease, Braveheart and Risky Business.

There are no direct depictions of nudity or sexual activity in this movie, however, there are some mild scenes where:

There is some mildly coarse, threatening and discriminatory language in this movie, including:

Furry Vengeance is a comedy containing some clever animation but with little humour for older audiences.  Most of the intended laughs revolve around people and animals intentionally injuring one another or animal poo/urine jokes.  While children will find some of these incidents funny, adults may become frustrated with the film’s lack of substance.  Further, the continual depiction of animals as calculating, almost sadistic creatures is a little unsettling.  The focus on revenge through aggressive action also establishes a confusing sub-text, which muddies the films’ intended message that success cannot be gained through selfish deeds.