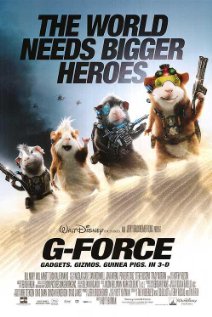 Not recommended under 5, PG to 10 (Violence, Disturbing scenes, Coarse language)

G-Force, directed by Hoyt Yeatman and produced by Jerry Bruickheimer, is an animated film that follows the adventures of a group of animals who have been specially trained to work as US government agents.  Under the direction of animal behavioural researcher Dr. Ben Kendall (voice of Zach Galifianakis), this crack team uncovers an evil plot linked to the launching of a new wireless communication system, “Cluster Storm”, developed by electronics entrepreneur Leonard Saber (Bill Nighy).

The animals discover that the new Saber system has the capacity to remotely communicate with every “Saber” brand household appliance, converting harmless goods such as coffee machines into deadly weapons.  Together, the G-Force operate covertly to prevent the destructive plan for world domination.  This secret anti-espionage group consists of guinea pigs Darwin (Sam Rockwell), Blaster (Tracy Morgan) and Juarez (Penelope Cruz), Speckles the mole (Nicholas Cage) and the blowfly Mooch (Edwin Louis).  Along the way, the team are hampered by the efforts of FBI agents Trigstad (Gabriel Casseus) and Carter (Jack Conley), who aim to shut down the G-Force operation.  As the situation becomes critical, the G-Force team realises that one of their own members has betrayed them, resulting in a bitter battle to save the world.

Death of loved ones; Betrayal

There is frequent mild animated and comedic violence in this movie including:

There are no additional scenes that are likely to scare or disturb children aged eight to thirteen.

There are some implicit sexual references in this movie, including:

There is some suggestive and mild coarse language in this movie, including: