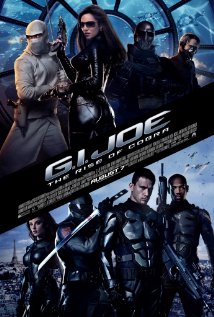 Not suitable under 13, PG to 15 (Violence, Disturbing scenes)

Arms dealer James McCullen (Christopher Eccleston) runs a weapons manufacturing company that has developed ‘nanomite’ warheads; missiles loaded with microscopic computerised bugs that are capable of destroying anything and everything in their path. NATO has purchased four of McCullen’s warheads and a squad of American soldiers led by Duke (Channing Tatum) and Ripcord (Marlon Wayans) has been ordered to transport the warheads to a secure location. However, while on route Duke’s convoy is attacked by a force of super soldiers lead by Duke’s ex fiancé Ana/Baroness (Sienna Miller). All but Duke and Ripcord are killed, but a second mysterious force of super soldiers (G.I. Joes) arrives on the scene and saves the day by rescuing the warheads. Refusing to give up the warheads, Duke and Ripcord accompany the G.I. Joes back to their base in the middle of the Egyptian desert where both Duke and Ripcord are inducted into the G.I. Joe force.
We learn that the man behind the nano technology is a disfigured masked criminal referred to as “The Doctor” (Joseph Gordon-Levitt) and are also introduced to two more of the film’s villains, Mr. Zartan (Arnold Vosloo) and the Ninja-styled Storm Shadow (Byung-hun Lee).
Just as Duke and Ripcord pass their G.I. Joe induction, the base is attacked by Storm Shadow, Baroness, Mr. Zartan and a small force of super soldiers, who manage to steal back the four warheads and then make their escape.
From now on the GI Joe Force is on a mission to stop the destruction of the world.

G.I. Joe contains stylised action violence (some of which is brutal), destruction, death and mayhem from start to finish with thousands of people killed and injured throughout the course of the film. However, while the violence is at times graphically depicted (heads exploding), it is depicted only briefly (in the blink of an eye) and at other times in a somewhat cartoon like manner, while blood and gore are depicted in a less than realistic manner by being kept to a minimum. Examples include:

In itself the film is a vehicle for the marketing of GI Joe toys, comics and merchandise which are likely to appeal to children.

There is some infrequent low-level coarse language and put downs in this movie. Examples include:

The main message from this movie is that fighting the evils of the world requires a global response.
Values in this movie that parents may wish to reinforce with their children include: